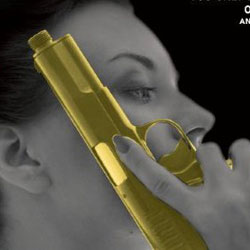 There are few disadvantages to living in the United States, one of them is the lack of access to European comics. During the 1950s and continuing until the 1980s, British newspapers ran syndicated adaptations of Ian Flemings James Bond tales. Those strips have been collected in single volumes, and now Titan Books is collecting those into giant volumes. Previously in James Bond: MI-6 needed agents who were the best, and those who were given a double-oh status were given a license to kill. 007, James Bond, was brought to life by writer Ian Fleming in 1953 and became a world wide sensation that brought glamour, love, and action to the genre.

Originally, James Bond appeared exclusively in the Daily Express, but Fleming sold the adaptation rights to the Sunday Times, a rival paper, which caused the series to end abruptly in 1962. Fortunately, Lord Beaverbrook and Fleming resolved their differences and the popular series continued with On Her Majesty’s Secret Service in 1964 – quite possibly my favorite James Bond story of all time, both in book and movie form.

In fact, this omnibus collects many of my favorite Bond tales including

When Fleming was approached by Lord Beaverton to adapt the tales into comic form, he was hesitant because he thought the serialized form would ruin the spy tales and his creation. Thankfully Anthony Hern’s adaptation of Casino Royale proved the books could be adapted, opening the door for Henry Gammidge and Jim Lawrence to work on these strips for nearly 20 years.

When Titan Books first approached me to inquire about reviewing this omnibus, I was hesitant, because I loved the source material, and having never seen this adaptation, I was prepared for the worst. The omnibus arrived yesterday, and in the span of 24 hours, I’ve devoured the entire volume, loving each and every moment. Of course it is Ian Fleming and James Bond, so already there is little to complain about, but Gammidge and Lawrence did an excellent job of turning the tales with massive action sequences and intricate conversations into something that is easy to digest. It’s probably also a plus that I’m reading these in trade form instead of the day to day release of the originals.

Growing up the daily fare was Peanuts, Garfield, Blondie, Calvin and Hobbes, and Beetle Bailey. With the exception of Bill Watterson, the art of the daily strip was nothing to get excited about. Prepare to be blown away if you have never seen John McLusky’s and Yaroslav Horak’s work. There is more detail in a single panel than entire issues of many comics on the stands today. It is jaw dropping. It is brilliant. It brings the world of James Bond to life on the printed page. Even if you don’t like James Bond, this book is worth the cover price simply to gaze upon the art.

While the omnibus is a paperback, kudos to Titan Books for using a heavy stock paper to add a feeling of class to the reading experience. Also, the square bound format keeps the layout of the story consistent – 4 panels per strip, 4 strips per page, though the pace may become repetitions for some.

BOTTOM LINE: BUY IT IF YOU LOVE BOND

This omnibus is a great buy for anyone who loves Bond, and it may be a great gateway drug to get new readers into comic books. The art is spectacular, and the adaptation is as faithful to the original work as possible for a comic strip published in an all ages newspaper in the 1960s. I’m giving the James Bond Omnibus 002 4.5 out of 5 Stars.