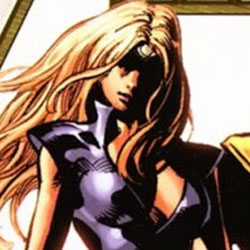 Cage’s Avengers have started to come into their own as a group, but can the team handle a mortally wounded Mockingbird on their first real mission together? Also, what was Fury putting together back in the late 1950’s? Find out after the jump. Previously in New Avengers: The team had heard of a small group of disgruntled former H.A.M.M.E.R. agents setting up shop in Rhode Island and went to take them down before they became a problem. Unfortunately, when the fighting started, Mockingbird got shot. And even more previously, apparently, Nick Fury of 1959 has been tasked with putting together a black ops team of Avengers.

THE PAST AND THE PRESENT COLLIDE

Actually, that is a bit misleading, as the two stories, told simultaneously throughout the book, have absolutely nothing in common so we’ll go ahead and break this down here as well. Fury and Dumdum Dugan and putting together their team, who ends up consisting of Sabretooth, Dominic Fortune, Namora, Kraven, Ulysses Bloodstone, and the original Silver Sable. Every bit of this story is just meeting the team, half of which seem to recognize Fury on sight, which says a lot for the world’s premier super spy. So, we have what I guess would be considered the “original” Avengers tasked with taking down the Red Skull and his Fourth Reich. I don’t understand what’s going on, why half these people are working together, or the relevance this has to the rest of the book and, quite frankly, it just leaves me disappointed for breaking up the action going on in the rest of the story.

Speaking of, Mockingbird has been shot through the stomach and is bleeding out in front of Spidey while the rest of the team still on site are kicking minion butt. Until Ms. Marvel gets to Superia, the head of this group who spends the entire issue complaining about the attack not being fair because she did not yet have the chance to prepare. Superia easily knocks Marvel away a few times, and just straight up owning her for the entire issue, kudos. Not only does she toss Carol around like a rag doll, she steps up as a greater threat and drops Wolverine as well. I think I can get behind this lady.

Meanwhile, Spidey does get to make a brilliant move calling for Dr. Strange specifically because he is “A real doctor” which can easily be forgotten or overlooked fairly regularly. “Borrowing” a henchman’s phone and a quick 911 call has the ambulance on its way.
The other three, Cage, Jessica, and Iron Fist, have absconded with much of the super weaponry and are some distance away at this point. We get some good back and forth between Mr. and Mrs. Power Man including her mocking him for carrying his truck and his use of “Jokers” instead of cursing. I found it kind of cute and a great way to show how they don’t realize what a craptastic time their friends are having; which is why the ambulances heading that way scare them a bit. And of course, the EMTs get to work just in time to have Superia finish her first two victims and, quite explosively, move onto the next.

But not in a good way. The past and present sequences were done very differently, probably to really differentiate them. I doubt this was necessary and the fact that the present looked much better did not help in any case. The past sequences were too bright, looking as though instead of adding shade to wear a shadow would have been there was a light, and actual light source mind you, coming from where the light would have been shining. The past also looked cartoonier with the present having a healthy realistic approach. Even without the comparison, the present did look good with some nice action shots and some great effects.

BOTTOM LINE: I DON’T HATE IT

I wish the past storyline wasn’t intermingled within. I could have lived with the bookends much like last issue, but every time it jumped in time I was pulled out. Bendis does give us some good lines and a well told story, and I am really digging the team composition and camaraderie. Superia does steal the show every single time she’s in panel, from yelling at her henchmen for using her Christian name to just dismantling the team, she is a force of awesome. Unfortunately, what could have been a good 4-4.5 is merely 3 of 5 stars due to the lackluster tale in between.