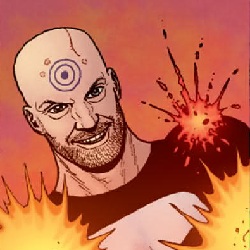 Sometimes you walk away from a comic because your favorite author leaves it as well, that was the case for me, and Garth Ennis. I didn’t read anything Punisher because I didn’t think it would be as good as Ennis, boy was a I wrong. Previously, in Punisher MAX: Frank Castle aka The Punisher, has waged a war on crime for years, and has recently focused on bringing down Wilson Fisk aka The Kingpin, once and for all. But with the Kingpin’s wealth, he enlists Bullseye’s aid in snuffing out The Punisher, before he can do the same to him.

ARE YOU THERE GOD? IT’S ME, BULLSEYE

One Time Square Bomb Threat later, and it’s just some alone time with tools of death. As Frank’s skirmish with Bullseye heats up faster than a .50 Cal. on full-auto. Throwing everything from bullets, to knives, to nails, and even vomit at each other, Frank and Bullseye hold no punches, but even the most brutal physical blows can top what Bullseye has in store for Frank.

One of the funniest, and possibly most true to character moments in all of Bullseye’s comic book life is right here in this comic, the internal monologue he delivers at the beginning of the comic that’s in the same vein as “Are you there God? It’s me, Margret” kills me.
The way the whole ordeal is orchestrated is absolutely the best two man fight I have ever read in a comic book. I try not to deal in absolutes, I try to leave myself open to all the possibilities, but for right now this will be a pinnacle to reach.

I love the fighting in this issue, but other than the way they are choreographed, there isn’t much dialogue here, simply because it’s a fight issue. You don’t come to a comic with The Punisher in it expecting “Hamlet”, you come to see gallons of blood, and over the top, “Itchy and Scratchy” style violence, minus the cat and mouse.

Steve Dillon is one of those artists that I like only on certain projects. I know his work best from “Preacher”, a book that I loved, up until the ending which wasn’t that good. But, I also know his work from “Wolverine: Origins”, a comic that he didn’t belong on at all, and his art was inappropriate for.
Steve is at home on anything Punisher, he has paid his dues over the years, and is, the Punisher artist in my eyes.

But back to the issue at hand, once Frank and Bullseye have to resorted to using construction equipment, I knew right away that Dillon would own this comic, and the glove was thrown down for anyone to try, and top him. The way everyone moves, it looks like movie stills, and that everything is true to the panel before it, and doesn’t stutter for one second.

Every single brutal detail is rendered in the famous Dillon fashion, while some won’t care for Dillon’s less detailed style, compared to contemporaries such as Bryan Hitch. Dillon’s art has it’s own voice, and has been a constant in a world where some artists take years, and never finish the project they are on. I take comfort in a fact that when Steve Dillon is doing the art on a project, it will get done, and art will be what I have come to expect from him.

This is the best $3.99 I have spent in a long time, it is pure fun, and I feel so guilty that I didn’t give Jason Aaron the time to prove that he could take up the Punisher reins. The package as a whole is a bundle of entertainment, and I will be adding Punisher MAX to my pull list once I get up with my comic book guy, who is responsible for putting this in my hands. If you want a bloody entertaining comic, in ever sense of the word, check this out.
Final Verdict, Punisher MAX #11 receives 4.5 Stars, out of 5.