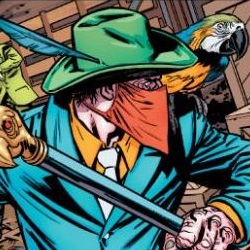 Previously, in Batman Incorporated: Batman has set up a global initiative to bring the Batman brand of crime fighting to every corner of the globe. This adventure brings him to Argentina.

After a slight delay Batman continues his globe trotting adventure, it’s El Gaucho’s turn to share the spotlight with The Bat, something that El Gaucho, aka Don Santiago Vargas, doesn’t care to do.
While El Gaucho will take the Bat’s assistance in a daring daylight hostage rescue, that’s more like something out of Zorro than any Bat-verse title I have read, El Gaucho doesn’t want anything to do with Batman Inc.

Excavating yet another character from over 50 years ago, the South American villain Papagayo, Grant shows what he is good at, bringing back characters that have fallen into limbo.
Not only does Grant bring up obscure villains in this issue he creates one as well, the mysterious Doctor Dedalus who is confronted on the Falkland Islands by a group of British super-heroes. But this is the part of the issue that I didn’t really care for, and feel that it was almost written by a different writer, the tone is 180 degrees of where the rest of the story goes, but, that’s Grant Morrison for you.

Another thing I noticed after I read this issue, it went by much quicker than the first two, and upon a story page count of only 20 pages, I realized that it had been a side effect of keeping a majority of DC’s books at $2.99. Now I know not every writer can cram as much story into 20 pages as Bill Mantlo could, but you have to give up the double page splash, it’s just like burning donuts in the parking lot when you are running on fumes, just go home before your car quits on you.

Even with the clearly limited page count I was really engrossed in the story, and much more fascinated by the characterization than the action. I just hope the next issue is on time because with things going by quicker I can’t guarantee my attention span will give Batman Inc. #’s 4, and 5 the time of day when ever they do drop.

First off Yanick’s artwork here is much more striking than what was in Batman Inc. #2, I think it’s the lack of city clutter, and that the environments depicted are much more varied, thus appealing aesthetically, to me. I am glad Don Santiago has a bevy of female beauties that Yanick can illustrate to his heart’s content, and he not only makes them pretty, but gives them a power that makes them almost pop off the page. Though they are very pretty ladies, the pin-up style poses that crop up can be groan inducing, it’s Batman, not a Import Car magazine.

The action that is pulled off in this issue fits really well, and Yanick is able to propel it forward at a steady movie-style pace, portraying many different angles all with relative ease. My choice for the cream of the crop, isn’t the obvious choice of the hostage sequence in the canyon, with Papagayo, and his hot air balloon.
But rather the obligatory posturing by Bruce and Don Santiago, as the later exudes machismo in the presence of a wooing Bruce Wayne, who is quite frankly cramping Don Santiago’s style. But they way each of them react off each other is great, and every emotion can be read clearly off their individual faces.

The only draw back is that somewhere down the line Yanick couldn’t finish the whole comic, and had a ringer, Pere Perez, step on up to finish pages 16, and 17 of the issue. I could tell that the art wasn’t Yanick’s on page 17, but there is the presence of a Paquette Batman on page 16, so I don’t know what to make of that page. But, over all the art on this issue rocked.

Well the issue as a whole you need to know a few things, like say Spanish, and my skills are very limited, for there is a half page of dialogue in Spanish, and I just had to roll with it. Also you might want to know of where, and what the Falkland Islands are, because instead of putting the helpful caption, “Falkland Islands, Off the mainland of Argentina” they put, “In time of War.” You don’t have to make it so simple it talks down to you, but help those out who don’t know, or care about world history.

With the writing and art being good, and the highlight of the issue being the relationship between Bruce, and Don Santiago, hopefully the newest B.F.F.’s on the block! The issue is well worth a pick up, if simply for the way Don Santiago rages out at the sight of Bruce’s arrogance.
Final Verdict, Batman Incorporated #3 receives 4 Stars, out of 5.