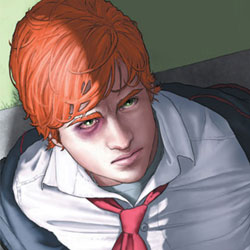 Previously in Morning Glories: After failing to break out of the Morning Glory Academy, the new kids have started to settle down and accept their fate in one of the most torturous prep schools around.

Last issue focused on Jade, and everything that happened to her prior to her arriving at Morning Glory Academy. This issue takes a closer examination at Hunter, the red haired goof who wants to date the pretty girls, but is just a bit too shy to grab life by the horns.

Until one day he did.

And then it gets weird. But really, is that a surprise? This is Morning Glories after all. During Hunter’s flashback we learn a bit about his special talent, or rather, lack of talent. I won’t give it away here, but let’s just say he is constantly late for everything. A few issues ago, readers were presented with a story that happens in the future, and because this issue focuses mostly on the past, time has suddenly become a big player in this tale. Heck, it wouldn’t surprise me if there wasn’t some time travel going on as the children discover their powers.

If you are wondering if anyone dies in a horrible, horrible, way, then the answer awaits you on the last page of the issue.

I pondered how long Nick Spencer could dangle the carrot in front of readers before we started to get bored and drift away, but we haven’t reached that point. I have a feeling a year from now, we’ll all be diving back into the old issues to see where Spencer placed all the clues that lead us to where we are going. The story is incredibly deep, and the mystery continues to build. I like that we are exploring each of the central characters pasts, but I can’t help but continue to urge Spencer to not stray too far into the land of J.J. Abrams.

SCANNED ART IS NOT GREAT ART

You may have heard that I enjoy reading digital comics. I think the colors pop a bit more on the illuminated screen than the high gloss medium stock paper, and if my fingers are greasy, I don’t smudge the screen. Image Comics has decided the best way for us to review comics early is to put them on an online service and scan them in (many other publishers send us PDF files). Now, not only do I have to suffer through a poorly designed interface (not Image’s fault), but I do have to look at scanned art that isn’t of high caliber – this is Images fault, and does a disservice to the artist. During on of the black out scenes, the scanner reflection is very noticeable, and overall the colors are sort of washed out.

None of this is the fault of Joe Eisma, as he’s done a good job so far. In this issue, his environments are still a rather sparse, but his composition is good, and I like how he frames panels to cut off certain valuable bits of information to hide the big reveal.

Morning Glories is another one of those rare reading treats in a sea of mediocrity. While the mystery and the seemingly out of thin air plot twists will leave you scratching your head in most cases, the twists have just enough of a hook to keep you coming back with each installment. I like the character development that has occurred these last two issue, and to date, this has been my favorite installment. Morning Glories #8 is so worth picking up, earning 4 out of 5 Stars.