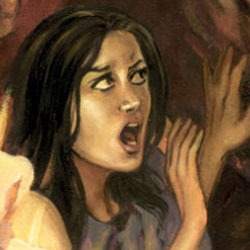 Secrets are revealed, a quest begins, and a party is formed. Dark Sun continues to spin a tale set in a desolate world, and it just keeps getting better. Previously in Dark Sun: After surviving the wastelands, the unlikely duo of Grudvik, a Mul gladiator, and Aki, a human bard, have found their way back to the city in search of Grudvik’s love, and the secret entrance to the UnderTyr.

Grudvik and Aki have unknowingly been carrying around a very important key that will unlock the hidden treasures of the House of Ianto, but unfortunately, they only have half the key. The other half is still in the hands of Haskyr, a person of importance in the house, and someone in close constant contact, with Rubi, Grudvik’s love. When the four characters meet, secret identities are revealed that put Rubi and Haskry on the same team – they’re both powerful spellcasters, and the four quickly decide to see what exactly is buried deep beneath the city.

It’s unfortunate that others in the city know of the two halves of the key, and turn against the team, calling in the city constabulary to arrest everyone. What follows is a great escape scene, a journey into the sewers, and a first encounter against the undead.

As each chapter grows, readers have been given excellent character building, and here we finally get to venture into the catacombs and the beginnings of a grand quest typical of a Dungeons and Dragons campaign. It’s so well put together, that I almost forgot that the book is following the very tropes we expect to see in a D&D adventure. Alex Irvine uses the world set up by Wizards of the Coast, and creates a lush environment (albeit one that is quite arid) for his characters to go adventuring in. This is one of the few tales that I look forward to reading each month because it is so different from the standard fantasy stories I’ve been exposed to thus far. I only hope that Irvine continues to be creative, and doesn’t get lazy in his story telling.

While the art is fairly simple, its the highlights and shading that give the art real depth. I like that I don’t have to squint my eyes to see what is going on, or to try and figure out who is who in each panel. Even when things get really dark or explode into fire during a major fight scene, each of the characters, both good and bad, are easily recognizable.

The coloring really adds to the complete story. When the group enters the sewers and use magic light to guide their way, everything takes on a green tone, when Rubi explodes a group of undead, the page goes super-nova with the reds, oranges, and yellows. Additionally, the paper stock IDW decided to print this series on, ads to the feeling of a dry arid environment, as the pages are matte and slightly rough compared to the slick glossy pages found in other titles.

I know $3.99 is a lot ot pay for comics, and it runs the fine line between me buying the book and tossing it aside. That’s why I’m glad the story being told is so worth the price of admission. A grand tale is being told, and the art moves the reader through the tale with ease. I would venture that not many are familiar with the Dark Sun campaign setting, making this a great contender for other barbarian tales being offered. Dark Sun #3 is a fine read and worthy of 4 out of 5 Stars.