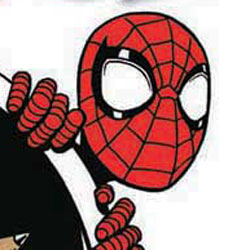 C2E2 kicks off March 18 in Chicago, and Marvel has released their panel schedule for the show. 3:00 – 4:00 PM: MARVEL: BREAKING INTO COMICS THE MARVEL WAY– Are you an aspiring writer or artist? Have you always dreamed of working for Marvel? Well, here’s your chance to pick the brains of some current House of Ideas employees who were once in the same shoes! Join C.B. Cebulski, Marvel’s SVP Creator & Content Development, Mike Pasciullo, SVP Brand Planning & Communications, Skottie Young (Ozma of Oz), Jeph Loeb, EVP Head of Television and more as they answer any and all questions about how to get a foot in the door at every level in the creative process and how to make your job MARVEL.  Room 471.

6:00 – 7:00 PM: MARVEL: WELCOME TO THE X-MEN – Marvel’s most uncanny heroes have emerged bloodied…and not altogether unbowed…from the Curse of the Mutants. But now that the survivors have been drafted to “Serve & Protect”, what will be the vampire legion’s next move? And what secrets are at the heart of the mysterious timeline known as the “Age Of X”? Pop your claws into all the answers as X-Editor Daniel Ketchum, C.B. Cebulski, Marvel’s SVP Creator & Content Development and a slew of surprise guests as they explore the present landscape and multiple futures of the X-Men.  Room 471.

1:00 – 2:00 PM: MARVEL: FEAR ITSELF – The biggest comic event of 2011 has arrived! An ancient evil has re-emerged from the void to form a perverse alliance with Sin, daughter of the Red Skull…and everything from the allegiances of world’s heroes to the very order of the Marvel Universe itself will forever be changed. Find out what happens when every waking moment becomes a nightmare with Matt Fraction (Fear Itself), Brian Michael Bendis (Avengers, New Avengers), Fred Van Lente (Herc, Alpha Flight), C.B. Cebulski, Marvel’s SVP Creator & Content Development and more! Gaze into the face of Fear Itself!  Room 471.

3:00 – 4:00 PM: MARVEL: AVENGERS ASSEMBLE! – Whether they go by the name New, Secret or otherwise, every Avengers team will be left reeling as dark secrets from the past of the Marvel Universe reveal the true lineage of Earth’s Mightiest Heroes! How will the team’s founders react…and who will be left to confront the forces of Fear Itself? Find out here as the creators behind your favorite Marvel heroes answer your questions and let you in on what happens next! Join Brian Michael Bendis (Avengers, New Avengers), Matt Fraction (Invincible Iron Man, The Mighty Thor), Editor Tom Brennan, C.B. Cebulski, Marvel’s SVP Creator & Content Development and more as they heed the call of “AVENGERS ASSEMBLE!”   Room 470B.

4:00 – 5:00 PM: MARVEL TELEVISION PRESENTS: THE AVENGERS: EARTH’S MIGHTIEST HEROES AND MARVEL ANIME – Don’t miss Marvel Animation’s exclusive look at an all-new, action-packed episode of The Avengers: Earth’s Mightiest Heroes! Plus catch a full-length episode screening of the highly anticipated Iron Man Anime! Marvel’s Head of Television, Jeph Loeb, will be there to launch you into this action-packed hour featuring your favorite Marvel Super Heroes and Super Villains battling it out! Make sure to check out The Avengers: Earth’s Mightiest Heroes, now airing on Disney XD, and the all-new Iron Man Anime series, coming this summer to G4! Room 471.

5:30 – 6:30 PM: MARVEL: CUP O’ JOE – This is it, Mighty Marvel fans – the no-holds-barred, anything goes, full of surprises panel you wait all year for, and it’s here!  Marvel’s Chief Creative Officer Joe Quesada takes on all questions, shocks the audience with jaw-dropping announcements, and keeps you guessing with superstar guests Brian Michael Bendis (Avengers), Matt Fraction (Fear Itself), Jeph Loeb, EVP Head of Television and C.B. Cebulski, Marvel’s SVP Creator & Content Development. You better be here, because this is the panel that everyone will be talking about!  Room 471.

2:30 – 3:30 PM: MARVEL: NEXT BIG THING – From the Marvel U to the Ultimate U and everything in between, we’ve got the top talent on hand to talk about all of your favorite heroes and villains as well as make a few surprise announcements!  Panelists include Brain Michael Bendis (Death of Spider-Man), David Liss (Black Panther: The Man Without Fear), Fred Van Lente (Herc, Alpha Flight), Editors Tom Brennan and Daniel Ketchum and more as they take on all questions!  Room 471.