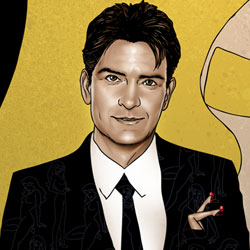 He may not have been bitten by a radioactive spider or escaped a dying planet, but with recent “admissions,” of having “tiger blood and Adonis DNA,” actor and recently ubiquitous bad boy Charlie Sheen has the makings of a comic book character. So from mild-mannered sitcom actor to “Vatican assassin warlock,” Charlie Sheen’s life, career and recent shocking behavior will be featured in an upcoming Bluewater Productions biography comic book.

“Infamous: Charlie Sheen” not only provides a framework for his recent media-captured outbursts, but also shows the path of how the highly-paid actor reached this critical point in his career. The 32-page comic will also tackle substance abuse and mental health issues.

“Doing a book about Charlie Sheen is different from most bio comics in that the news is literally happening as we speak.  Who knows what he’s going to say or do next and how will that fit into the context of telling his story,” said issue author Mark Shapiro. “As I am writing this I am constantly aware of what could change at the last possible minute. This is when comic book writing is more like journalism.”

According to Bluewater, the title, scheduled for release this summer is an unorthodox take on an unorthodox career. Suggested by Diamond Distributors, Bluewater will develop and publish an up to the moment account of Sheen’s life.

“We’re not looking to exacerbate what could be a sad situation; a public person self-destructing on camera. We can all laugh how outrageous Sheen is behaving, all waiting for the next ‘Duh. Winning” moment, but I want to make sure that part of the focus of this issue deals fairly with mental health and substance abuse issues.” said Bluewater president Darren Davis.

Davis added, “There are those who are going to complain that we are exploiting Sheen. But honestly, this is no different than People Magazine devoting most of an issue to the story or TMZ or Slate or the general media’s constant coverage of breaking developments.”

“If Sheen contacted us right now and wanted us to donate some of the potential profits to a charity of his choosing, we would happily do so,” Davis added. “Infamous: Charlie Sheen,” written by Shapiro, drawn by Fred Grivaud and will feature cover art by famed comic book artist Joe Phillips. The issue will retail for $3.99 and be available to pre-rder this week through most online venues such as Amazon.com as well as local comic book stores.