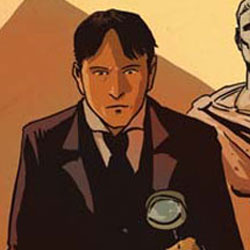 Before they became an inseparable pair, Sherlock Holmes and Dr. John Watson met on several occasions while doing consulting work for Scotland Yard. Someone is randomly killing people on the streets, and with the Ides of March upon us, there are sure to be more deaths if the killer isn’t found. Previously in Sherlock Holmes: Year One: Dr. Watson meets Sherlock Holmes for the first time while summoned to a robbery of London’s wealthy citizens. Watson is instantly taken by the young sleuth, and begins to follow his exploits.

BEWARE THE IDES OF MARCH

Murder is the order of the day, as seemingly random citizens are brutally stabbed to death across London. Scotland Yard is convinced they are the results of tricks gone wrong, but Dr. Watson isn’t so sure, especially when each body has a mysterious note attached to it. Watson believes Holmes may be of some service, tracking him down to a shipyard, where he see Holmes learning swordplay from Asian sailors. The investigation begins, but soon another body shows up dead on the streets. It’s clear Holmes’ mind is working overtime on this one, and by the end of the first issue, he sees the connection, but can’t quite pinpoint the villain.

I’m not really sure how many people read the original Sherlock Holmes tales. We may be at the point where unless someone is a diehard detective fan, or forced to read the Conan Doyle tomes, comic book and movies may be the only place where these characters can live. If that is indeed the case, Beatty tweaks the history of Holmes just enough to align it with current knowledge of the character, while introducing another mystery for the dynamic duo to solve. I like seeing Holmes learning martial arts and sword fighting skills from the source, though the sword fighting Holmes learns is more akin to the Samurai way than traditional fencing. While Holmes never used a sword in any of the novels, he is noted as being a master swordsman, so seeing where that craft was learned is a nice touch.

As far as the story goes, it is a lot of set up. The previous issue was a great one-shot adventure to introduce the reader to the characters, and I wouldn’t have minded if each issue in the series was treated that way. However, it’s clear that readers are going to be treated to a series of mysteries/adventures much like Beatty did with the Buck Rogers series from last year. Once again, Beatty’s writing isn’t bad, I just hope he is able to make the solution make sense when the mystery is finally solved.

Once agin, my concerns over the Dynamite House style arise as the heavy inks, mixed with the sometimes flat, sometimes shaded colors, creates a crunchy look that feels like someone went a little crazy with the Levels control inside Adobe Photoshop.

There is lot of attention to detail in the faces and clothing of the characters, but the surrounding environment looks rather sparse. Indro has the framing and composition of the scene down, but it’s that damn coloring and inking that takes it down a couple of notches for me.

I don’t know what I want in a Sherlock Holmes comic. Certainly the series that ran last year was a good start, but a long drawn out mystery where the reader must put in a lot of effort into what is going on is not it. This particular issue comes off as slightly above average, as I like how Beatty is bringing a little more to the characters than what many may be familiar with. I’m willing to see this first mystery arc to its conclusion, giving Sherlock Holmes: Year One #2 3 out of 5 Stars.