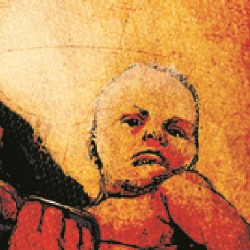 Losing someone you love can be, and most of the time is, a life changing experience. While some learn to let go, and move on, the man only known as Cole, can not, and will not. He is going to cut a unholy swath of vengeance across Civil War torn America. With a bounty on his head, and his son at his side can Cole come out on top? Previously, in Pale Horse: It’s a self contained story originally published as four issues, and collected into this TPB.

WHAT’S SO CIVIL ABOUT WAR?

For Cole, a man who suffered through the hardships of slavery, to eventually escape, and fought as a soldier in the Union Army, a life of peace, and love was owed him. But nothing, ever goes as it should.

Wicked men, filled with hate, and bigotry savage his Sioux wife, and with them wicked men being white, the law sees nothing amiss.
“AIN’T NEVER GONNA BE JUSTICE.”, says Cole. He is right. There are times you have to take things into your own hands, and they sometimes get bloody. With the bodies of three dead men on the ground, along with one bigots jaw, Cole has set himself down a path that will spiral out of control, and eventually lead back to the war he walked away from.

My first thoughts after reading this TPB was that it seems like a movie, more of a UNFORGIVEN, than a WILD BUNCH, but a movie none the less. Our protagonist Cole, comes off as a cold man, all most soulless, as he bleeds man after man, for the wrongs that have been done against him. It can be said that showing any weakness, in a time of war is a bad decision, but through the whole book, Cole’s emotional range is that of grimace, and being stone-faced. I couldn’t connect with him as a character due to his lack of humanity, his affection towards his son would have been something to play off of, but nothing comes of it.
The plot of the story is good, on some levels it reminds me of a Clint Eastwood movie, namely UNFORGIVEN, but in other’s almost like a Grind House movie of the 70’s, a lot of violence, and action, but no real heart. By weaving in a plot thread involving espionage, the movement of the story stutters, but none too much that it kills any forward momentum.

WHAT WE’VE GOT HERE IS A FAILURE TO COMMUNICATE

The artwork that is presented within “Pale Horse” is disjointed, and a bit distracting. The prime example is a scene on the fourth page, of Cole’s infant son crying, who looks more like Benjamin Button, than your average crying child. It made me literally exclaim, “What is that?”, I tried to give it a pass, move on and just enjoy it, but inconsistencies kept on popping up.
At some points it’s as if the artist can’t decide if he wants the character to look realistic, or abstract, and in the indecision, decides to blend the two styles. As a result the characters, and the environment the inhabit clash, and pulled me out of the story on several occasions.
I am from the school of thought that the artwork within a comic book should be able to tell a story, even a basic one, without the use of word balloons. To be able to communicate through the art who a character is, and sometimes why the are doing something, the art from this comic trips all over that concept.
Mr. Dibari’s art may be a acquired taste, like that of Ashley Wood, or Paul Pope, two artists that at one point, I didn’t care for, and who’s art I ,“didn’t get”, but now I do.

Though the story and art are not my usual cup of tea, I did my best to give them a fair shake, and I think I did. The plot is quite interesting in how it uses historical events such as the Confederacy’s surrender at Appomattox Courthouse, but peppering in historical events can’t substitute character development. The lack of development for Cole, as well as his antagonists, leaves you wanting to know more about these characters other than one’s the good guy, and they are the bad guy’s.
The artwork with the it’s inability to stay focused, took a lot of the enjoyment out of the book, and it also made me think of classic Western Comic Book artists such as John Severn, and even Doug Wildey, which isn’t a good sign. But I have to give the book credit, I didn’t give up on it, I got to the finish line. It wasn’t a waste of time, I don’t have no malice for the comic, or it’s creators, I just wasn’t enthralled as I could have been. That possibility was there, but it never reached it’s potential.
Final Verdict, the Pale Horse TPB receives 2 Stars, out of 5.