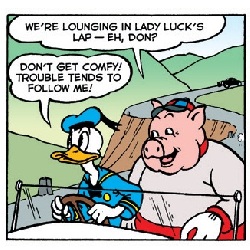 Donald Duck. Icon, of the animated cinema. Donald Duck, a character that’s been around longer than most of your Grandparents. Does Donald’s age turn his comic foray into a fine vintage wine? Or just sour grapes with taste of sweaty feet? Previously, in Donald Duck and Friends: Donald has had many adventures all over the world, and sometimes, even in his own backyard of Duckburg. From time to time these adventures involve his Uncle Scrooge McDuck, and his three nephews, Huey, Dewey, and Louie.

GREED IS GOOD…UNTIL IT’S NOT

Family, is a great, and sometimes, terrible thing. Donald love’s his Uncle Scrooge, even with him being the biggest tightwad in the Milky Way Galaxy. But with great wealth, must come…The Beagle Boys.
On top of Killmotor Hill, in the city of Duckburg sits more money than you could spend in two lifetimes, all you have to do is get to it, like the Beagle Boys mean to.
You can tell right away that this story is not from these politically correct times, using a swath of landmines, and auto targeting cannons to deter thieves, and on top of it, traipsing children through it all.
All that’s overkill, we’d just use ADT now. But, I jest.
Scrooge’s “foolproof” home defense devices not only keep magazine salesmen and crooks of your back, they keep you nice, and forcibly cozy in your Money Bin as well, leading to keen comedic moments that I got a chuckle out of. The characters are not a developed as you’d see in modern age comics, but they are pure. Something that really can‘t be said for much of anything in today‘s comic market. They story itself is fun, and very reminiscent of something that would have happened on the “Duck Tales” TV show.

War can be Hell, movies like PLATOON, and HAMBURGER HILL have engrained that into my psyche, but reporting on them can be just as nightmarish.
After slapping down a $200 fine, for insulting a Police Officer, Donald is pestered by the next William Randolph Hurst to such a degree that he runs into a his gluttonous pal, Peter Pig(alias Spider-Ham?!). Donnie and Pete are offered a job to report on a war that is going on in Sylvania, they except, and right off the bat, nothing goes as planned.
It’s probably not a good idea to name your newspaper “Another World”, for the simple fact that your reporters will be regarded as loons, when they say where they are from. When in fact one of them is a Duck.   See what I did there?
I like the matter of fact way this story is laid out. It’s steadfast in it’s delivery, though a tad stiff, it’s still got some mobility. May not be able to play a three on three pick up game, but can get out for a brisk jog.

Both stories are by writer/artists, both did their jobs well. Though these two stories are different formats. Carl Barks’ tale is 10 pages, and done. The line work is crisp and smooth, and word balloons are of course, hand drawn, and are very organic with the rest of the artwork. The hand lettering is easy on the eyes, as well as the color pallet, which may not be as bright or vibrant as some might expect, it doesn’t deface the ink-work that was laid down on the page, as some modern colorist seem to do.
The second story in the issue is a collection of a serialized story that was published in Italy, at the rate of one page a week. In regards to the artwork of Federico Pedrocchi, though while not as crisp as Carl Barks’ style, Mr. Pedrocchi’s line work is more akin to that of still framed animation. The panel, and action flow is smooth, and the characters seem to almost move as you are reading the page, he also knows how to illustrate a happy pig.

Well when you boil this issue down, it’s a reprint issue. Two tales, under one cover. Both probably not written and illustrated for a audience this far into the future, where we still don’t have out flying cars, or talking ducks for that matter. I was actually hooked on the “Donald Duck Special Correspondent” story, and with it being Part One of Two, and to be concluded in the next issue, I will be surely checking that one out. So if you lived in the 90’s, watched, and liked “Duck Tales”, you should try this out. It has cartoon violence, but it’s not mean spirited. If you have a child that you want to buy a comic book for, this is a great choice.
Final Verdict, Donald Duck and Friends #364 receives 3.5 Stars, out of 5.