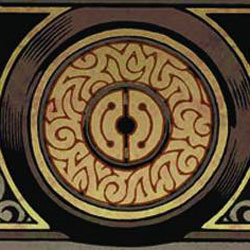 For the last several issues, the Locke children have been running around finding keys, and trying to cope with the drama that surrounds teenager’s lives. With only fourteen issues remaining in this fantastic series, when is something big going to happen? Previously in Locke & Key: February wasn’t a very good month for Tyler. Not only did he have to cope with weekly attacks from the Dark Lady (aka Zack – SPOILER!), but he had his heart crushed, and discovered his classes weren’t going as good as they should .

Tyler never came across in this series as a dumb jock, more like a kid who needs some direction in his life. The realization that he needs to take charge of his life comes front and center in this issue, as readers discover he’s doing much better in school, has been offered a scholarship to the same university his parents met, and he’s been quietly putting together the clues that point to someone in his inner circle being behind the Dark Lady attacks.

The story really kicks into high gear when Tyler sees and opportunity to investigate Zack’s home while the demon/villain/bad guy is otherwise preoccupied at a fencing tournament. Unfortunately, Zack is more of a foe than Tyler planned for, which probably explains why he has been around for as long as he has, and by issue’s end, Zack has Tyler at the tip of a sword and ready to run him through if he doesn’t divulge the location of the Omega Key.

In the previous issue, Joe Hill blasted readers through the month of February, introducing new keys and magical items without giving a lot of explanation. This month the story slows down, and while we are still presented with magical items, little explanation is needed as the devices are used to wrangle Tyler right after he discovers Zack is the big bad. While the first series introduced readers to the Locke family in a very traditional story telling way, and the second series ramped up the mystery of the keys with each installment, I’m really glad Hill is taking a very different approach to telling the stories in this series. Instead of methodical storytelling, which gets really old, really fast, Hill is mixing it up. One issue looked at the story from Bode’s perspective, the rapid, nearly dialogue free fourth issue, and now this installment, which gets everything back on track and serves up the much needed hook to carry readers through the next arc of this series.

Since I first found Locke & Key, I’ve been praising Gabriel Rodriguez’s art. In my mind, the guy can do no wrong. He’s one of the few artists that is consistently awesome issue after issue. And whether he is teasing us with new keys hidden in a room, or dazzling us with his ability to create a highly detailed environments, I never get tired of gazing upon his work.

Cover art is something I rarely talk about, because most comics today either have a different artist doing the cover work, or the cover is in no way related to the content inside. With Rodriguez, it takes a while, but eventually a theme emerges. In Keys to the Kingdom, each cover is splashed with blood to represent the increased violence and risk that accompanies the story. This issue focuses on the willingness to spill blood in order to get to the Omega Key, and the tease for next issue has me concerned about Tyler, especially after the cliffhanger ending this month.

I know some readers hate it when I jump up and down telling people to buy Locke & Key, Atomic Robo, and other favorite titles, but there is a reason for it. Once you get on board, people end up loving the series. Once again, Locke & Key adds an exciting new turn of events in the big overall story, puts a central character in a true life or death situation, and has art that will blow your mind – or at least get you wondering why all comic book art can’t be this good and this consistent. Hill and Rodriguez once again hit it out of the part with this installment, and I’m very happy to give this issue 5 out of 5 Stars.