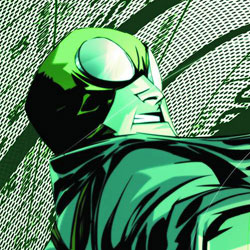 Terry McGinnis has a lot of decisions to make; spend time with his girlfriend, his family, take orders from Bruce Wayne, or join the Justice League. Previously in Batman Beyond: The new Matter Master has had enough of being the low man on the totem pole when it comes to cleaning up after the Justice League. So he’s turned himself into a villain, and gone on a rampage. Unfortunately, that rampage takes place in Gotham City, and he’s taken Terry McGinnis’s mother and brother hostage, along with most of the rest of the shoppers in a mall. To make matters worse, as the Justice League and Batman enter the facility, he’s turned them all into statues.

Matter Master, while ingenious in acquiring the matter rod, isn’t too bright when it comes to using his powers. Instead of curing himself, or turning lead to gold, he decides to match wits with the power behind the future Justice League. And so readers are given 14-pages of the fighty-fighty, while Matter Master uses his powers to take down each of the members, while Batman and Bruce figure out a way to bring him down completely. While the fighting isn’t that great – it’s all pretty predictable, Beechen does find moments that let the reader catch their breath, while setting up two future story elements that will occur down the road.

The best part of the issue comes at the end when the Justice League once again offer Terry a spot on the team, while at the same time, Bruce is yelling in Terry’s earpiece to turn them down. Instead of doing what everyone else wants, Terry finally grows a pair and sets his own rules and limitations that satisfy everyone, and even surprises Bruce in the process. The only person who isn’t going to be pleased is Dana, who once again has been left out in the cold. This move is a great one, as it develops Terry’s character once again. And this is something key to this series continuing – instead of fooling the audience with gimmicky bits and resurrected heroes from the past, Beechen is actually taking the time to turn the boy hero into someone who can stand on his own. I like these character development moments, and it almost feels like we’re back in the ‘60s and ‘70s watching Peter Parker grow into adulthood.

While I really like Beechen’s writing style, Ryan Benjamin walks the line between cartoony characterization and realism. It’s doesn’t always work like you might think, as sometimes the proportions between Batman’s head and ears grows from panel to panel, kinda like Kelly Jones’s take on Batman’s cape.

When it comes to using the story panel to its full potential, Benjamin does a great jog of staging a confrontation between Aquagirl and Warhawk. She’s much shorter than he, and in order to get them both in a horizontal panel at the same time, Aquagirl’s head barely makes it over the edge of the frame. It really makes an impact in the way the female hero delivers her lines.

Batman Beyond has solidified itself as a title that will appear on my monthly pull list. I enjoy Beechen’s writing, and while the big story points are nothing new, it is the small character development elements that make the story worth picking up. The series style is quite different than what many who viewed the animated series are used to, but Benjamin makes it work. If you want something that is out of the main DC continuity, but still want your Batman fix, Batman Beyond is there. Batman Beyond #3 is a good read, and earns 3 out of 5 Stars.