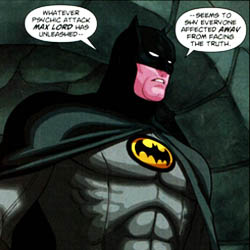 There has been a lot made of the fact that members of the Justice League International tend to get killed, maimed, brutalized and otherwise smacked around in the recent years of the DC Universe, and while I admit that this is the case, I don’t suspect that there’s any sort of real malice involved.  I suspect that it’s more of a “Let’s Serious This Character Up” going on, which these days means throw in a beating or kill off a buddy for ratings.  Either way, as one of the last survivors of JLI/JLE, Power Girl has been targeted by Max Lord for nefarious purposes.  Will the arrival of another ex-member turn the tide? Previously, on Power Girl: Karen Starr’s life is a shambles.  Her business is in ruins, her reputation has been crushed, and even her standing in the metahuman community is threatened by her association with Booster Gold and the surviving members of Justice League International, who all believe that an invisible madman is controlling minds and that Blue Beetle didn’t kill himself as everyone CLEARLY remembers.  Can Dick Grayson help her to find the truth?

We open on the heels of the recent Generation Lost issue, wherein Karen has fought Captain Atom, thinking that he was a maddened and rampaging Superman.  (For somebody whose power was just nudging your brain one way or another, Max Lord has really moved up the power charts.)  The battle is over, and Karen heads for home, hoping to find a link that will prove once and for all that the JLI (and she herself) is not out of their minds with this talk of Max Somebody or other…  Unfortunately, Batman isn’t any help, as his mind has once again been wiped by the post-hypnotic suggestion, while her assistant Nicco finds out who is behind the purchase of her company, a woman named Ophelia Day (who is to my memory new, although I suspect that she’s a front for a super-villain.  Doctor Cyber, maybe?)

The Greatest Superpower Of Them All

In one of the saddest flashbacks of all time, we learn that Ted Kord called in Power Girl and a couple dozen other heroes before he went after Checkmate and Max Lord all those months ago, but nobody believed him when he said there was a threat, leaving him alone to his fate.  Power Girl retrieves the casket in which Kord was interred, and brings it back to the Batcave, only to have Grayson naysay every option or theory that says anything other than suicide.  Suddenly, another Batman enters, telling PG and Batman Junior that something is keeping Dick from remembering the truth.  Power Girl is amazed, as Bruce quickly and effortlessly shows his protege the truth, entreating him to say the words.  “Ted Kord was murdered,” murmurs Grayson, and Bruce tells him to remember it this time.  Aside from the fact that there’s little to no reason WHY Bruce was immune (although, if you pay attention to the timeframe, he was dead when Max used his brainpan, and also on the moon, with Steve) it’s an effective sequence, and the ending of the book, wherein the last Kryptonian survivor of Earth-2 and the Goddamn Batman sweep out, capes fluttering, to save the day, is quite awesome.

The Verdict: Stephen’s Abandonment Was Premature, I Think

Winick’s takeover of this title was abrupt and brusque as heck, and really rankled me as a reader when it wiped out everything that Amanda, Justin and Jimmy set up, but it has become clear that this was an intentional effect, to show how sudden and dangerous having Maxwell Lord target you can be.  I’m still not entirely cool with Starrware being dismantled, but this issue shows that it’s an ongoing process, and that perhaps things are not beyond repair.  The art in this issue is quite good, as Sami Basri acheives a subtlety that reminds me of both Frasier Irving and Daniel Acuna, making Power Girl both muscular and feminine, and even delineating between two guys in identical bat-cowls with subtleties of facial shape and expression.  Nice work, under a simply beautiful and understated cover.  I’m really glad that I stayed with Power Girl’s book after the change in creatorship, but I’m still a bit miffed at how long it took to get to the bloody point about what’s really going on.  All in all, though, even with parts of the open mirroring what we’d already seen in Generation Lost, Power Girl #21 justified my faith in the strength of the character, and earns a nicely handled 3.5 out of 5 stars overall. Hopefully, the book is strong enough that it will enter the post-Gen Lost era from a position of strength, befitting the strongest woman alive…

Faithful Spoilerite Question Of The Day: Is it a great touch or more silly Bat-worship plot devicery that Bruce is immune to Lord’s brainwashing?