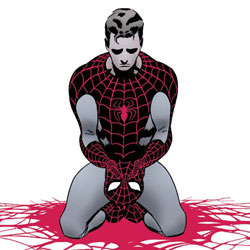 Whether he is willing to accept it or not, death has surrounded Peter Parker all his life. But, with the death of Marla Jameson, it’s time for Spider-Man to take a stand. Previously in The Amazing Spider-Man: When Spider-Slayers attack, collatoral damage is going to occur. In the fray, Marla Jameson, the wife of J. Jonah Jameson is killed.

DREAMS SAY SO MUCH

To be honest, I thought my interest in Dan Slott’s Amazing Spider-Man run would be over by now, but dammit if he doesn’t pull something out of the bag to make each issue more interesting than the last. As a storyteller, Slott is able to use the page to its full effect, even when there isn’t any dialogue. The first ten pages of the issue feature the funeral for Marla Jameson, and Slott steps aside to let the art tell the story. Not a single word is spoken. It’s eerie, it jumps out at you, and it is so well done.

The first words spoken in the issue are by Uncle Ben. Yes, that Uncle Ben. When Peter finally goes to sleep, his dreams are filled with a surreal discussion with and about those that have died at Peter’s hand. It’s a fairly frightening experience for the hero, and when he awakes, he has a renewed interest in protecting those around him, promising to never let anyone die again. That’s a pretty strong statement – one we know will fail at some point.

Marcos Martin has a very interesting style, that looks like a cross between Darwyn Cooke and early Jim Steranko. It’s an interesting style that is oddly attractive and it kept the story flowing from page to page.

When it comes to the dream world, things tend to get a bit strange when artists are given free reign, but Martin keeps everything relatively under control. There are few odd architecture moments – the Brooklyn Bridge looks like a deranged dark tower of death, but overall, Martin keeps it simple and to the point. That is somewhat opposite f my stand on artists taking the easy way out by filling the page with large areas of solid color, but in this situation, I’m giving it a pass.

I did drag my feet this week in picking up and reading the issue, and I’m kicking myself now. The Amazing Spider-Man continues to be a top notch book, and I don’t think I’ll be leaving the series anytime soon. The art is fantastic, and Slott’s way with words (even when they aren’t there) is amazing. It all comes together in a 5 Star book, making The Amazing Spider-Man a must buy book of the week.