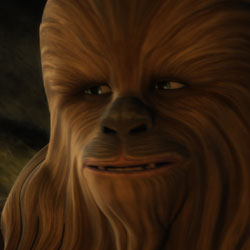 We’ve already seen/heard Liam Neeson as Qui-Gon Jinn in recent weeks, and now we learn that the team at Skywalker Ranch brought Peter Mayhew to advise the animation team. “[Supervising Director] Dave Filoni said my participation in creating Chewie for the series was essential,” says Mayhew. “He told his artists to study the way I walk, my mannerisms and demeanor. He said, ‘To understand Chewie, you need to understand Peter.’ We also went into the Lucasfilm archives and studied some of the original Chewie costumes to make sure the details were carried over into the animation.” “Bringing Chewie to The Clone Wars is very special for us, and it wouldn’t be right without Peter’s involvement and blessing,” says Filoni. “Peter and Chewie are one and the same; he brings so much of himself to the character and it was important for us to capture that. Otherwise, it just wouldn’t feel right. Having his input was great; he was able to add all the little mannerisms and details that he knew from living with Chewie for more than three decades.”