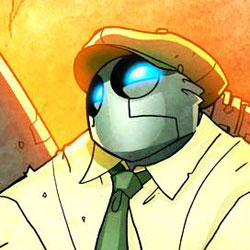 Relationships in Atomic Robo’s life have been the focus of attention in this latest arc, as the automaton found love with Jack Tarot’s daughter, and came to an understanding with his father over his adventuring ways. But strange things are still afoot in New York, and major revelations are made. Previously in Atomic Robo: Mysterious robberies have brought crime fighter Jack Tarot from Chicago to New York. Having met his hero, Atomic Robo has decided adventuring is in his blood and has stepped up to help solve the crime. Of course, it doesn’t hurt that Tarot’s daughter is easy on the eyes, and in love with the metal man.

In past volumes, readers have only been given a glimpse of the madness and villainy that is Thomas Edison. This issue presents us with our biggest look yet, at the man who will stop at nothing to get what he wants – even if it means jeopardizing his own relationship with his son, aligning himself with the mob, and activating a giant robot to commit crimes. We still don’t know what his end game is, but we’re given enough of an idea to know it isn’t a good thing.

Once again, what really works in this issue is Clevinger’s ability to write a story that plays off relationships as they grow stronger, or deteriorate. Here we get to see Helen and Robo on a date, where the realization that Atomic Robo is only seven years old sinks in, and though mentally our hero is 25 or so, it still freaks Helen out a bit. It’s a funny exchange that is probably one of the most memorable moments of the issue.

The other element that I really like in this issue, is the mystery solving that goes on. Part Sherlock Holmes, part dumb luck, Clevinger presents the clues to the reader and characters, only to have them line up at just the right time to lead to the issue’s cliffhanger. Unlike other stories, where the answer is telegraphed pages and pages ahead, Clevinger (through Wegener) presents the needed information in such a way that you know the information means something, even if we don’t know all the details.

While my comments about adding a lot of detail to the panel in my last review didn’t have an impact in the way Wegener approached the art in this issue, I did notice a lot more “stuff” all around. Run down buildings look like run down buildings. Dirty streets look dirty. The pneumatic tunnel sequence is awesome in the amount of detail and grime present. Some rooms still look a bit too clean, and it wouldn’t hurt if there were a few more chairs in office settings, but overall, I like the scenery much more this go around. I understand that the detail is going to get kicked up even more in coming issues, and I look forward to that.

I’m a big fan of Wegener’s work, and think his style is one that works perfectly in this series. And really, his style is so unique and to my personal liking, that he is one of the few artists I’m willing to follow when he works on other titles.

There are so few flaws in the Atomic Robo series. A fun and engaging story, great art, and a character that spans generations allow tales of Atomic Robo to be told at any time in history. If there is a title that deserves to sell 200,000 or more copies a month, it’s Atomic Robo. When other titles are difficult to access, characters with histories that are continually retconned, and character overexposure threatening the interest in the property, Atomic Robo is the bright light in the darkness that keeps me reading month after month. Buy this issue. Buy it now. It’s 5 out of 5 Star goodness.