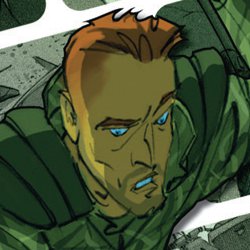 Matz and Luc Jacamon explore the implications of what happens when greedy corporations are in charge of our armed forces. Are these wars being fought for peace or for profit? And does Cyclops #4 live up to the rest of the series? Read our review to find out. Previously in Cyclops: Douglas Pistoia has been growing concerned about Multicorps and their influence on the battlefield. While his home life begins to show signs of falling apart, Pistoia now finds himself in-line with a reporter named Fuentes who is dead set on exposing the corruption in Multicorps.

The latest installment of Cyclops is not only the best, but perhaps the most enraging as well. When the series started, Multicorps only had cameras on the battlefield to entertain a ravenous television audience. Now the cameras follow Douglas Pistoia and his squad around during their downtime as well and Pistoia’s home life is becoming a nuisance to Multicorps. There is one scene where executives from the company flippantly go over their options for what to do about Pistoia’s wife who they call a “harpy.” Their manipulation of everything in Pistoia’s life is a microcosm on how they have been manipulating everything on the battlefield so far.

While the scene involving Pistoia’s wife is a reminder of how cold Multicorps is, Matz opens this issue with perhaps the most disturbing and engrossing scene in the series so far. After Pistoia’s group comes under fire, they flee into the wilderness. The Multicorps executives panic because they say that the area isn’t in their “pre-prepared zone.” Their panic towards the squad veering off the script exemplifies just how controlled this war really is. They aren’t just filming the war, they are also directing both sides. It becomes evident that this isn’t so much a battlefield as much as it is a TV set.

Matz has done a great job showing how much of a toll that this has had on Pistoia. The book opened with Pistoia wanting to build a better life for him and Tatiana. He was hopeful that this gig with Multicorps would afford him his dream life. However, after the stress of having his every move broadcast around the globe and slowly learning the truth about the company he works for, Pistoia is beginning to devolve into a paranoid alcoholic. It will be interesting to see if he can hold it all together long enough to expose Multicorps to the world. Remember, this isn’t a superhero book and a happy ending isn’t guaranteed.

Luc Jacamon’s art has always been one of the highlights of these issues. His way with simple storytelling and memorable imagery has been the driving force of this story since the first issue. He illustrates this world with the grace of a Hollywood cinematographer, while never trying to outshine the story with needless flash. His close-up shots of Pistoia’s face after an intense dream sequence perfectly depicts a man at the end of his rope.

There is also a great use of colors in the book as everything pops right off the page. All too often in recent comics, artists try to depict the world as grey and ultimately very drab all for the sake of “realism.” But Jacamon uses every color to its fullest potential and creates a lush world that is both beautiful while still looking “realistic.”

Cyclops is easily one of the three best comic book series on shelves and is definitely the most socially aware. Matz and Jacamon are creating a disturbing, yet engaging masterpiece. In a time when most comic companies are more worried about which character to kill off next in an attempt to drive up sales, Matz and Jacamon are putting out a book that is better than anything the “big two” could ever dream about publishing. Buy this now and experience comics as they should be.