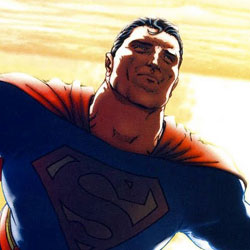 After weeks of watching Wall-E again and again – my son’s current favorite movie of the moment, I convinced him that we should sit down and watch All-Star Superman that arrived in the Major Spoilers HQ this past week. The pull to get him to agree was that it featured the death of Superman. It worked on him, and I would bet that the plot point works to bring others into the Morrison fold. Previously in All-Star Superman: Once upon a time, a writer, who some hail as the second coming, decided to kill Superman. Along with his favorite art companion, the duo set about telling an epic tale of heroism and sacrifice, and in the end, turned more than a few heads in coming up with a great story. The volume of work was so well received that Warner Bros. Animation decided to set about adapting the story for a direct to DVD movie. This is the result.

If you don’t know the story, I’d suggest first listening to the Major Spoilers Podcast, where we break the Absolute edition down for you.

When it comes to adaptations, things are going to need to be cut down to size to fit within the time limit the producers have been given. In this case, quite a lot has been removed from the Morrison tale

With all this gone, that leaves just under half of the individual chapters from Morrison’s book still in tact, but it is enough to tell a complete tale. Even with the inclusion of the Samson and Atlas, and Replacement Supermen chapters, the core of the tale is still there – Superman is willing to do whatever it takes to save Earth, and those he holds dear.

When it is all boiled down, Dwayne McDuffie took the material and distilled it to the essence of what makes All-Star Superman a good story. And in the process, he may have even upped Morrison in one crucial moment in the story. When Luthor finally sees the world the way Superman sees it, it kind of falls flat on the printed page. McDuffie on the other hand, expands upon Lex’s revelation and turns it into a much more dramatic, and cathartic moment for the man who plagued Superman for years. It’s very well done.

I was really disappointed that DC didn’t add a lot of extras to the DVD like they’ve done in the past. I was really hoping for another short subject, but I guess the days of getting bonus cartoons on a single disc are long gone. Commentaries and sneak peeks at upcoming projects (Emerald Knights and Superman/Batman: Apocalypse) are there, but it just isn’t the same without more value for the money.

I’ve never been a huge fan of Frank Quitely’s work, so I was pleased that the art team decided to take the artist’s style and mix it with their own toning it down in the process. The extreme lines that Quitely uses simply wouldn’t translate on the screen without looking like a complete mess, so the compromise works. That being said, there are moments at the beginning of the movie, that look like they are ripped from the page, and for those that don’t like his style, it could be a turn-off for the rest of the picture.

The animation style that is used works well in this adaptation; there are no special tricks or gimmicks used, though it’s interesting to sit down with the All-Star Superman Absolute Edition after watching the movie to see how much was changed in the final shot.

When all is said and done, I think Dwayne McDuffie did an excellent job in translating the work into a movie. All the key elements are there, and for those approaching the material for the first time, the movie serves as the gateway to a much more broad story. I think the two go hand in hand, with the collected book serving as a nice supplement to the movie. Hopefully, DC and Warner Bros. will do some kind of marketing gimmick where they use one to drive sales to the other. If you are looking to fill your DVD shelf, and you don’t mind adaptations that leave a lot of the material out, then All-Star Superman is worth picking up. I enjoyed the my evening watching the movie, and think you will, too. I’m giving All-Star Superman the animated movie 4 out of 5 Stars.