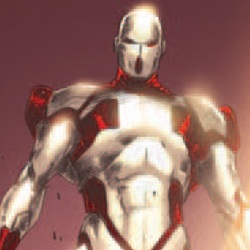 The last time I read Soldier Zero, I was none too impressed, marking the book at just above average. Issue five marks the beginning of a new story-line from a new writer/artist team – can it re-capture my interest? Find out after the jump! Previously, in Soldier Zero: an alien parasite has fallen to Earth and bonded with paraplegic war veteran Stewart Truman, allowing him to transform into Soldier Zero, an alien weapon with superhuman powers. Now, Soldier Zero is thought to have killed an ‘innocent’ police officer.

In this issue, a being known as ‘Application Nine’ transports onto Earth, beginning something called a ‘Code Icarus Recovery’. Whilst Nine sets about gathering information on the Soldier Zero hybrid, Stewart visits his brother, James, in hospital, who is now missing an arm. James begs Stewart to give him the hybrid, believing that it will replace said arm. Nine’s cover gets blown by some government agents and, sensing the danger, Stewart reluctantly transforms into Soldier Zero. A brief fight ensues, and we end with Soldier Zero seemingly-beaten, about to undergo Nine’s recovery procedure.

This issue lost me on the third page, when Application Nine transports onto Earth; he accomplishes this feat via ‘quantum-portation via the hospital M.R.I. scanner,’ and this makes absolutely no sense. I don’t care what kind of technology Nine has, there is nothing in an M.R.I. scanner that could aid in the transportation of matter. And so, three pages in, my suspension of disbelief was utterly shattered, and it was very difficult to treat the rest of the book as if it possessed any sort of gravitas.

A few words about the plot: so far, it appears to be extremely similar to the plot of the previous arc. Some alien force is looking for the Soldier Zero technology, and it hides in plain sight. The alien force and Soldier Zero have a fight, and Soldier Zero appears beaten at the end of the issue. Repeating the story that just finished is not a way to retain anyone’s, interest.

There are more problems, too. When Application Nine first transports in he is discovered by an hospital janitor, and here it is revealed that Nine can take on the forms of others, which is fine, but it’s never made clear in this opening sequence, or throughout the rest of the book, just how it works. The janitor comes in, and Nine gives a little speech, then appears to activate his disguise, commenting that the janitor is, ‘Hearing and seeing a whole ‘nother thing entirely,’ but he clearly activates the disguise after he is discovered, so it makes no sense why the janitor would ignore what he just walked in on. Furthermore, Nine takes a number of forms this issue, and something that is never explained is how he – presumably being an agent of some alien race (who we assume have not encountered humans before) – can act the part of humans so well. I’d be willing to accept that he can get by with some of the forms he takes – a TV reporter, or a government agent – as he could have conceivably observed such people and very quickly learnt how to portray them, but he impersonates a girl’s father at one point. I simply cannot believe that an alien agent could impersonate a man so well as to fool that man’s own daughter, even briefly. My final problem with Application Nine is that all his powers – both to disguise himself and to fight – are loaded up as ‘applications’ from a phone-like object he is carrying. This strikes me as an idea that seemed really good on the drawing board, but I find it utterly ridiculous that a race that can master matter transportation can’t come up with anything better with which to equip its agents than an iPhone.

In fairness, I liked the scene where James asked for Stewart to give him the alien hybrid, so desperate is he to have his arm back. Putting a rift between two characters who were previously close is a good way to generate drama, and I only wish this issue had focused more on these two characters and their changing relationship.

Finally, the dialogue is a bit stilted in places, and in the middle of the issue we get a two page ‘interlude’ during which it is revealed that the villain of the previous arc may not be dead. On this I will say: calling something an ‘interlude’ does not make it any less of a sudden and random change of scene and focus.

The art is mostly functional, but it really falls down when it comes to facial expressions: they often come across as really over the top, or otherwise they don’t tend to gel with what is going on in the panel. There is one particular panel that really bothers me, as well: when Stewart is trying to get past the military guard outside his brother’s hospital room, him and the guard have a brief conversation about Stewart’s military past, and the guard decides to let him in as a consequence. After the exchange of dialogue we get a close-up panel of the guard’s face, with no words, whilst he thinks for a moment. The problem comes from the fact that in that close-up the guard sports the exact same face as in the last panel – and I mean, here, that it is the same drawing, zoomed in. Would it have been that hard to draw the guard’s face again, so that he could actually show some emotion? Or at least have him look different to how he did in the panel right above. On the plus side, the fight scenes were competently drawn, and I enjoyed the art in the ‘interlude’.

The two covers range from interesting but irrelevant, to generic and boring. Cover A features Soldier Zero standing over the body of a dead police officer. It is well drawn, but this cover is about the events of the previous issue, and so as a cover to this book it is rather nonsensical. Cover B is just Soldier Zero wielding some sort of energy ball – inexcusably lazy and boring.

BOTTOM LINE:  Not Worth It