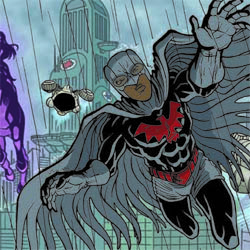 Or – “Classic Heroes Unfamiliar To ME???  INCONCIEVABLE!!” Being from the wilds of Kansas, I have a particular regional view of my comics.  The Hulk fought Spider-Man in Kansas City, rather than Denver or Noo Yawk, I never see the Bronze Age regional 35-cent variants, and it’s damn near impossible to find late 60’s alternative rarities like witzend or the Fabulous Furry Freak Brothers.  That said, I have heard rumblings of the Golden Age of Canadian comics, names like Freelance, Nelvana of the Northern Lights, and Johnny Canuck, but they’ve never made it down to my neck of the woods.  (Some might question my ability to even FIND Canadia, given my state’s notoriety in terms of education.)  Those heroes are back, thanks to Moonstone Publishing, giving us an entryway into the Golden Age of the Great White North, and it’s time to hit the trail for some comics history that’s esoteric even for ME.  I’ve been looking forward to this one… Previously, on Northern Guard:  More than just ‘America’s Hat,’ Canada has a long tradition of superhumans, but most don’t venture outside the borders of their homeland.  It is the year 2029, and the world has been forever changed by a misguided attempt to dismantle the world’s stockpile by a man who used to be known as the Red Rogue.  His machine changed the nature of most metals, throwing the world into a new Dark Age, save for a swath of real estate in North America, a realm where electricity still works but many people have been transformed into superhumans.  Now, that selfsame Red Rogue is leading an armed invasion of Canadia to end civilization once and for all, only to come face to face with the Guardians of the North.  Let the battle begin!

(I swear, that is the first and last Mackenzie Brothers reference…)  We open after last issue’s cliffhanger, in which the evil Red Rogue threw a mountain at our heroes as they fled.  Inuit goddess Nanook (the girl in the while fur bikini on the cover) literally laughs it off, destroying the mass with but a gesture, and escaping with an injured Johnny Canuck.  There’s always a bit of heavy lifting to do when you have multiple characters to introduce in a short span of time, and we quickly meet Merlin, Commander Steele, and Canuck’s girlfriend (who is also the spirit host for goddess Nanook) and a quick rundown of who the villain is and what’s going on in the world.  There’s some fighty-fighty and some ‘splodey ‘splodey as the Red Rogue attacks an Air Force base and the Guardians move out to confront him and his army of nastiness.

Why Do Ya Suppose They Call Ham, Bacon?

I’m digging the art a lot, although the coloring is considerably brighter than I’m used to, with vivid reds and slightly muted blues and browns at the same time, making the color palette feel a bit retro (not that there’s anything wrong with that.)  I like that artist Cutler can convey emotion, draw a polar bear, and do impressive machinery all at the same time, and the heroes are visually distinct and interesting (especially Doctor Destine, the one who looks like Tony Manero with stars on his face, and Merlin, who looks a lot like Wayne Campbell.)  Nanook is clearly meant to represent Nelvana of the Northern Lights, Canada’s first actual superhero, but even so, she serves in the team’s “Thor” role well.  Overall, there’s some interesting stuff going on here, perhaps even TOO much, as some subtext involving Freelance and the Doctor went almost unnoticed in my first reading.  The issue ends with a reprint of a full Golden Age Red Rogue adventure, which is a neat touch.  With that 12 page reprint, the total package ends up being 34 pages of material for $3.99, which isn’t bad at all…

Ty Templeton is a name I recall from the olden days of the 80’s black-and-white explosion, but his work in this issue is very accessible, giving the reader what they need to understand about the characters in quick and clear fashion.  I don’t have a lot of history with any of the characters here (save for Nelvana and Freelance, and that extremely limited) but that doesn’t hamper my understanding or enjoyment of the future shock storyline.  I hadn’t realized that this was a three-issue series when I initially ordered it from Previews in the fall of 2010, but as with most of their offerings, Moonstone delivers an interesting take on superheroics without a lot of the barnacles that you see in the big two comics these days.  I’d be really interested in hearing from someone who loves the Canadian heroes and how this story follows through on their childhood memories, but for me it’s solid storytelling and nice art.  Northern Guard #2 earns a well-deserved 4 out of 5 stars overall, adding another regular Moonstone book to my pull list…

Faithful Spoilerite Question Of The Day:  Are there any fans out there who remember these heroes original adventures?