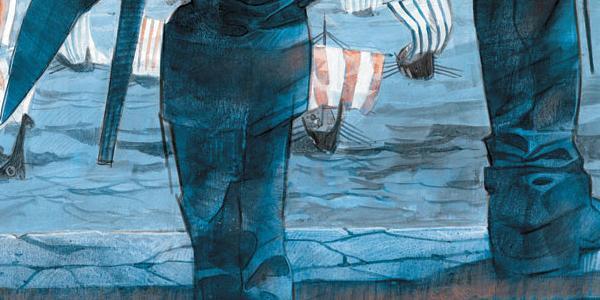 The newest issue of Northlanders opens with thirty thousand raging Vikings versus two hundred Frenchmen stuck in a tower in the year 885 AD. What’s not to love? With Northlanders, Brian Wood has crafted a consistently entertaining historical comic that should appeal to comics fans of all stripes. Every few issues starts a new storyline of self-contained stories, giving Wood the flexibility to jump around in time and tell whatever story he feels like telling. The only threads linking the storylines is that the subject matter is generally badass Vikings doing badass things and the quality is always very good. The stories are brutal without being exploitative and give the reader a real feeling for a more savage time.

BUT HOW IS THIS ISSUE?

The latest issue of Northlanders begins a new arc, telling the story of the siege of Paris through the eyes of one Mads, a Viking mercenary captain in Sigfred’s army. Mads is a wonderful protagonist; he’s funny, determined, brave. The self-contained story structure of Wood’s Northlanders series doesn’t really allow for the most in-depth characters, but Wood does give them enough nuances for them to be interesting. This issue is mostly set-up, but Wood hits all the right beats to draw the reader in. There’s a siege going on, these Vikings want to kick some ass, a bishop is involved, people are getting hit with boiling oil, all of which Wood excellently captures in the voice of a ninth-century Danish mercenary.

In issue #37, Wood writes the siege of Paris not from the standpoint of the few embattled souls stuck in the tower, but casts the point of view through the assaulting horde. This is a nice inversion of the usual “beleaguered heroes against the odds” narratives exemplified in films like Zulu and Black Hawk Down. Instead of identifying with the besieged, the reader identifies with the besieger. Rather cleverly then, Wood reveals on the final page that while our hero may be charming, he’s also a right bastard.

The art on Northlanders #37 helps sell the strong writing. Simon Gane’s pencils are more in the classic cartoony vein than some of the newer photorealistic styles, but this lets him draw the characters with appropriate grit and ugliness. Gane doesn’t skimp on the detail either. His panels are packed with action. While it sometimes is a little too static, his overall work looks like a Ridley Scott film on the page. It’s cinematic without being sterile. The world Gane draws looks dirty, nasty and lived-in. The title page splash is especially nice, depicting a horde of Vikings assaulting the tower as arrows fly everywhere. The individual warriors blend into each other, forming a massive collection of helmets, shields and swords bearing down on a tiny number of stolid French archers. It looks great.

Dave McCaig’s coloring dovetails nicely with Gane’s work. McCaig tints each sequence in the story with a distinct hue that aptly evokes the necessary atmosphere. The opening pages, depicting the onslaught on the tower, are saturated with red and orange hues suggesting overwhelming fire and blood. The colors are never murky, but serve to perfectly complement the action on page.

Any new arc of Northlanders is a perfect jumping on point, since all the arcs are self-contained. But if you’ve never picked up an issue of Northlanders, I highly recommend you pick up this one, as Wood, Gane and McCaig are hitting it out of the park. It’s not life-changing comics, and it’s not terribly deep, but Northlanders #37 is damn good fun. And if you’re not careful, you might just learn something.

Northlanders #37 contains thirty thousand Vikings, seven hundred longboats, twelve doves, five trebuchets, one dead horse, and one guy hit with a trebuchet boulder, as well as five twangs, two ka chunks, one thok, one krak, one kasplash, one vzzzzz and one bmp (this is the sound of a man getting hit by a boulder). Five out of five stars. Check it out.