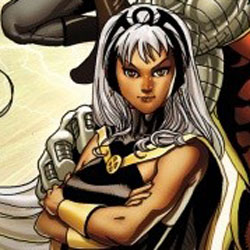 Everything Changes in Astonishing X-Men

This spring, Astonishing X-Men takes a dramatic twist as two amazing pairs of creators team-up for a astonishing crossover event—all in one series! This April, acclaimed creators of Daniel Way, Christos Gage, Jason Pearson and Juan Bubillo set Astonishing X-Men on a monstrous monthly new path! The X-Men split into two teams, each on seemingly separate missions (told by rotating creative teams) that collide with major consequences for the X-Men!

“For the first time since its inception, the events of Astonishing X-Men are happening in the current X-Continuity” explains X-Men Senior Editor, Nick Lowe. “Not only are they reflecting where the X-Men are, you will also see the debut of a character that is going to be an important part of the X-Universe at the end of 2011!”

Way and Pearson kick things off in Astonishing X-Men #37 as Wolverine, Cyclops, Emma Frost and Armor are all ready knee deep in a giant monster outbreak flattening metropolitan Japan! When the monstrous Fing Fang Foom attacks, the X-Men head into action! But while the X-Men are fending off the catastrophic beasts of Monster Island, Armor is contending with matters of a more personal nature. Can the X-Men save Tokyo without losing Armor? While that’s going on, Christos Gage and Juan Bubillo step in with Astonishing X-Men #38 for a story that truly shows you’re not always better off sitting it out when it comes to mutant adventuring! Starting this May, Storm, Colossus, Kitty Pryde and Beast will have to pick up the slack as Brood invasion threatens the other side of the Pacific coast in a tale that gives a whole new urgency to the term “meanwhile!” And that’s not all because not only will Lockheed be meeting Kitty Pride for the first time since the silver bullet, but S.W.O.R.D.’s Agent Brand comes back into the X-fold!

No fan can miss this truly unique take on serial storytelling as the X-Men take on Foom AND the Brood at the same time! The Astonishing line, bringing fans the top creators in the industry on the top characters, gets even bigger this April as fans get a monthly dose of Astonishing X-Men!