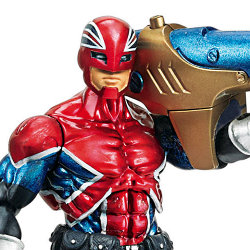 One of the hottest toy brands in the upcoming year will be Marvel Entertainment. With the release of two major motion pictures, multiple videogames and animated television shows, even Marvel’s B-List characters are becoming household names. And when it comes to toy lines, the most anticipated ones for comic fans are the movie toys for Captain America and Thor.

The Thor line should begin to show up in stores by March 1st and will include everything from 3.75″ action figures to role-play accessories such as a “Thor Lightning Hammer” ($19.99) “Thor Helmet” ($7.99) and “Thor Sword and Shield Set” ($9.99). However, the toy that most people should be on the lookout for is the “Thor Foam Hammer” ($9.99). This item will likely be the “Hulk Hands” of the Thor line and it is sure to be the leading cause of lamp breaking and grey hairs for parents in the U.S. for the upcoming year.

While the role-play items are great, the real highlight of the line was the 3.75″ action figures that were shown. With each one coming in at $9.99, there is a great variety of figures to choose from. There were multiple versions of Thor shown, a Fire Blast Destroyer, Odin, The Warriors Three, Sif and Loki. All of these toys had great detail and accessories without ever stooping to too many gimmicks. You won’t find oddities like “Arctic Blast” Thor or “Stealth Attack” Jane Foster in this line.

The Captain America movie line was shown next and was equally as impressive as the Thor line. The most notable Cap toys were the shield replicas that were shown. They come in two varieties: “Disc Launching Shield” ($19.99) and “Throwing Shield” ($7.99). The “Disc Launching Shield” has a, you guessed it, disc launching feature that is sure to have parents reaching for the aspirin and/or Xanex. And the “Throwing Shield” is like a Frisbee which was actually very cool for the price point.

The 3.75″ Captain America action figures are a little bit different from Thor’s because they feature both movie inspired figures and comic inspired figures. With the lack of costumed heroes and villains to be featured in the upcoming Captain America film, it only made sense for Hasbro to fill out the line with some comic figures as well. These figures include variations on the classic Captain America suits such as Bucky Cap, Ultimate Cap and US Agent. There are also villains such as Crossbones, the movie Red Skull and movie Hydra agents (the latter two were not at the show.) There were also some cool side characters for Cap to fight alongside of such as Captain Britain and Winter Soldier.

The final two solo lines that Marvel showed, Iron Man and Spider-Man, were pretty small in variety. But fans of these characters can expect some new hero and villain figures and a 6″ Iron Man line. However, Hasbro promised big things for Spidey in 2012.

Perhaps the most impressive part of Hasbro’s Marvel presentation was the Marvel Universe line. The biggest addition was the “Marvel Universe – Masterworks Sentinel with Wolverine” (Fall, $49.99) which stands about 16 inches tall and looks like it jumped right off the comic page. Other highlights included the Marvel Multi Packs (Fall, $22.99) which included The Classic Avengers, The Uncanny X-Force and The Fantastic Three w/ H.E.R.B.I.E. The sheer amount of 3.75″ Marvel figures was mind boggling with great additions like Captain Marvel, Scarlet Spider and others.

Marvel will be Hasbro’s most visible brand this year and they have done a great job using those properties to their fullest.