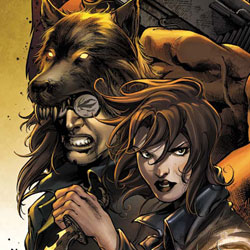 Given Wolverine’s assumed age, it should come as no surprise that Marvel reckons the most popular Canadian export short of Bryan Adams is deserving of a #1000 issue. Served up as an anthology, 5 distinct voices give life to everyone’s favorite Admantium runt. Find out if Logan knows the words to ‘Summer of 69’ by taking the jump! In his Twitterfeed, C.B. Cebulski, Marvel Comics Senior Vice President, Creator & Content Development encouraged new writers to review Wolverine #1000, saying that potential scribes should “…check out such anthologies to see what kind of stories publishers are looking for from newcomers.” He went on to say“…new writers should always remember that short stories are how you will most likely break into Marvel & DC.” Finally, he instructed new writers to train themselves by writing 8 and 11 page stories, introducing characters & conflict while telling a clear, concise story with a middle, beginning and end.

Several themes repeat themselves over the course of 5 distinct stories contained within Wolverine #1000. WWII American soldiers fighting against Nazis and their overwhelming military might is the subject matter of more than half the stories. Another 40% of the book contains confrontations with creatures of the lycanthropic variety. The one unifying element that permeates the entirety of this landmark issue is the presence of our titular anti-hero, Wolverine.

Told in two distinct parts, the first half of the story places us at the moment of final impact for a plane full of WWII American soldiers. The only surviving member of the crew is Wolverine, jettisoning himself from the critically wounded aircraft just as it explodes in an impromptu funeral pyre. We’re treated to some insightful exposition as Wolverine frees himself from the confines of his parachute and aims his freefall towards an oncoming enemy fighter. The Nazi threat is winding down, but in it’s last throws of angst, the wounded military beast is thrashing wildly in the midst of exhaling its last raspy breaths.

Writer Rick Spears captures a lot of power and poise in relatively few panels while artist Timothy Green does an admirable job of depicting the action. The second half of the story centers on Wolverine completing the original intent of the mission; infiltrating an underground Nazi bunker, calumniating in the removal of all perceivable threats. This is when we’re introduced to the distant cousin derivative of the SS version of the Super Soldier Serum. Except this time, the intended result was less ‘super man’ and more ‘were wolf.’ The story ends with a strong espionage component and a cameo appearance from none other than the Howling Commando himself, Mr. Nick Fury. The first half of Last of The Devil’s Brigade was stronger than the 2nd half, earning this portion of Wolverine #100 4 out of 5 Stars.

It’s a rare treat to read a story from Jimmy Palmiotti without the involvement of his frequent collaborator, Justin Gray. The team-up of Palmiotti & Gray consistently deliver good comics, and it’s reassuring to see Palmiotti’s individual storytelling remains strong as a solo act. Legend of The Crimson Falls features an off-duty Wolverine, looking to return to a favorite off-the-grid location, deep in the Adirondack Mountains. It’s been several years, but being secluded in this part of New York State puts him at ease and allows him an emotional, nigh spiritual cleanse. While much of the area remains as he remembers it, other portions of it are subject to impending change. It seems developers are building near the longtime Lionsgate Hotel, the very spot where Wolverine is headed. Coincidentally, there have been some rather grizzly murders of crewmembers associated with the new development. It seems that these murders indicate that an animal, or possibly something less classifiable, is the offending executioner.

Leave it to Wolverine to put his tracking skills to work and uncover a long-standing secret of the area. There are some compelling reasons why Logan has always felt a sense of belonging within the region and as a result of his nature, he’s forced to make a hard decision balancing the laws of nature versus the laws of man. Artist Rafa Garres depicts highly stylized art with unusual panel grid layout. At times the linework appears a bit on the murky side, but to be honest, it’s a good pairing with this particular story. The final scene portion of the story was not expected and made for a very satisfying conclusion. Legend of The Crimson Falls is quite enjoyable, earning 4 out of 5 Stars.

Adorable & Wolverine In The Same Sentence?! You Betcha!

The best contribution within this collection comes from writer Sarah Cross and artist Joao Lemos. In one of the most unusual Wolverine stories you’re ever bound to read, we’re treated to the story of an awkward, teenaged girl who is documenting the events of the day in her diary. It so happens that she (and she’s never given a name, other than ‘kid’) lives her life in perpetual constraint, unable to activate her true inner self. Her hero is none other than real life superhero Wolverine, who’s photos and exploits adorn every square foot of her bedroom. Things are hard for our protagonist, but she’s by no means a wallflower. She returns insulting remarks with her own version of Adamantium claws, her method being rapier wit. One night she happens upon a man who bears an uncanny resemblance to a particular X-Man who is the best at what he does.

Every bit of this story is endearing and genuinely engaging. ‘Kid’ embarks on a hero’s journey that is bound to shape the rest of her life. Writer Sara Cross is a skillful wordsmith and her humor and sensitivity help shape this into one of the best Wolverine stories I’ve ever read. Artist Joao Lemos renders the tale in an exaggerated ‘cartoony’ style, befitting of the ‘slice of life’ plot. For anyone who tires of the 1-dimensional, perpetual hyper-violence of Wolverine, Adamantium Claws is a fantastic departure point deserving of your attention. This is the first time I’ve awarded 5 out of 5 Stars.

You Should Be In Pictures

It’s ironic that the offering that includes the most traditionally attractive pencils is attached to the least satisfying story within Wolverine #1000. Development Hell is not a story that takes itself too seriously, but I’m afraid that the ornate linework actually works against the humorous overtones that should have been more effectively imparted on the reader. There is nothing in the character’s ‘acting’ that communicates humor or exaggeration. Therefore, on the surface, this appears to be a shticky patchwork of riffs on common comic book storytelling tropes.

Our story takes place in the Mojoverse where planetary ringleader Mojo runs his world like a business, specializing in live, televised violence and manufactured drama. Somehow Wolverine has become a prisoner of Mojo and is therefore subject to ongoing manipulation, effectively transforming him into an unwilling media star. Of course Wolverine somehow finds a way to escape the clutches of his captors and our story actually ends with him dropping a one-liner and a wink to the camera. This is by no means terrible, and it most certainly eclipses at least one other Wolverine title currently on the stands (Wolverine: The Best There Is). Development Hell earns 3 out of 5 Stars.

Who Can You Trust?

A strong competitor for ‘best traditional art,’ Last Man Standing is a straightforward Wolverine WWII story with some of the finest renderings of landscape and machinery I’ve seen in quite some time. The pencils are infused with heavy lighting and shadow contrast, comparable in style to Steve Epting. The figure work isn’t as expertly depicted, but it remains a strong effort, none-the-less. Wolverine is a recent addition to a platoon of soldiers, an outcast among the men due to his shallow residency and unknown origins. The men are traipsing through enemy territory, just at the cusp of engaging a Nazi brigade. Thankfully, Wolverine leads the charge and creates a tactical diversion so that his fellow soldiers can elicit victory. Will this be enough to ingratiate him into the good graces of the standoffish co-combatants? Writer Vince Hernandez does a good job of answering that question for us. Last Man Standing earns 3.5 out of 4 Stars.

In an age of Marvel’s excessively high pricing strategy, it’s a rare treat to find a book with high quality and high value. 72 pages at $4.99 is not only a bargain, but it makes this a must-buy book, in my estimation. Support the work of some up and coming writers and send a clear message to Marvel that value and quality is an appreciated commodity to comics fans. I highly encourage anyone with even a tangential appreciation for Wolverine to add this to your purchase queue.

Go Buy This Book & Do It Without Regret Or Hesitation

Averages be damned, based on the overall quality and value of this book, I break personal tradition and invoke the potential wrath of Stephen & Matthew by declaring Wolverine #1000 5 out of 5 stars! Hopefully I still have a job next week…