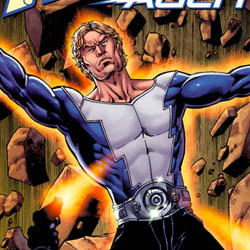 Or – “In Which 45 Years Of Continuity Subtly Reappear…” Being the type of fan that I am, my major concern with T.H.U.N.D.E.R. Agents has been where (if it all) it fits into the continuity of the older Tower Comics series, and previous continuations thereof.  The first three issues have (probably wisely) focused on the new characters, but the reappearance of original agent NoMan last issue has brought us deeper into the world of T.H.U.N.D.E.R., and this issue answers most of my questions once and for all, while raising a few more troubling ones as it goes… Previously, on T.H.U.N.D.E.R. Agents:  Years ago, The Higher United Nations Defense Enforcement Reserves (T.H.U.N.D.E.R.) attempted to save the life of one Professor Jennings, but managed only to save a few of his inventions.  Those devices became the core of the agency’s superhuman wing, and allowed the government to field superhumans against the likes of the Warlord, S.P.I.D.E.R., and various terrorists wackjobs (some of whom may have been from other planets.)  Since the series returned, we have been focusing on minor T.H.U.N.D.E.R. functionaries who have been tasked with finding new agents to fill out a new field team, while discovering that S.P.I.D.E.R. may have a secret wolf in their henhouse.  Last issue’s return of NoMan made it clear that, while T.H.U.N.D.E.R.’s glory days may be behind them, those glory days DID, in fact, happen.

This issue opens with my favorite sequence of the series so far, possibly my favorite sequence to date in 2011:  The orientation video for T.H.U.N.D.E.R.’s ‘Dynamo’ agents, with art by George Perez, who contributed art to a previous iteration of the team.  It’s a gorgeous piece of storytelling, and it not only references the original Agents, but the female Menthor from the unauthorized Deluxe Comics version of the book, and the new Menthor and Undersea Agent from the abortive Omni Comics run in the mid-90’s.  Essentially, it’s the first admission that the old stories actually happened for the purposes of this story and gives us a clear view of the disposable nature of the powered agents in the new series.  We then cut to Toby, T.H.U.N.D.E.R.’s “salesman” as he and his partner Colleen recruit the newest Dynamo to the field team.  He’s a rebellious bad boy with a mean streak, and at first I am disapointed that his antics cause Toby to defend her in a chivalrous manner, implying a pending relationship between the two agents.  The whole thing is savagely subverted, though, as Toby’s actions are shown to be nothing but a mindgame, a trick to manipulate young Eric into joining T.H.U.N.D.E.R.  It’s a very nicely handled sequence.

A Viper In Their Midst (And It Ain’t Randy Orton…)

The new Dynamo is thrown into action immediately, and the art by CAFU (I still don’t know if that’s a person, a collective, or something entirely different) is excellently handled, very dramatic and impactiful and other buzzwords and such.  After the end of last issue, the readers are aware that something is not right in T.H.U.N.D.E.R.’s world, as the agents of S.P.I.D.E.R. implied that they have a sleeper agent on the team.  When the reveal comes, though, it’s only a sort-of swerve, as the traitor isn’t (or may not be) whom I thought it was, but his identity was somewhat compromised by the promotional images for the book.  Anyone who reads Nick Spencer’s other book, Morning Glories, knows that he can craft a strong cliffhanger ending, and this book, like that one, has that in spades.  This issue, like the previous three, is mostly a single character focus, but at the end we have the intriguing premise that all the active agents are in enemy hands, allowing for the possibility of actual team action in the future.

On a recent podcast, I opined that if T.H.U.N.D.E.R. Agents can get past nine issues that they should be able to make it to issue #25, and this is a strong step in that direction.  Taking all the various team histories and creating the beginnings of a team canon using the strong stories of the past incarnations of the team is neat on two levels:  If you know the history, then the stories you enjoyed still “happened.”  (As much as that probably shouldn’t matter, it is good to know that you don’t have to deal with remembering which issues no longer exist.  As a Legion fan, I can tell ya, this is more exhausting than you think.)  If you don’t know the history of T.H.U.N.D.E.R., these pages can serve as a little bit of flashback depth, or even a stepping stone into the collected editions of the old-school adventures.  All in all, even with the ending surprise being sort of not so surprising, this is a good outing for the agents, and makes me want to know what happens next AND what happened between the lines.  The regular art team isn’t overpowered by the presence of Perez’ powerhouse pencils (something I can’t say for the latest issue of New Avengers, mind you) and having two art teams doesn’t cause a disconnect.  All in all, T.H.U.N.D.E.R. Agents #4 is pretty fine overall, earning 4 out of 5 stars and making the continuity cop in my very happy…  I still want to know what the heck is up with Craig Lawson, though.

Faithful Spoilerite Question Of The Day:  Any guesses on who the mole is?