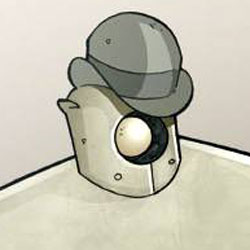 In his daring adventures, Atomic Robo has been to vampire dimensions, been lost in time and space, hung out with some of the most brilliant (and devious) minds in history, and fought a dinosaur bent on taking over the world. All the science stuff is well and good, but what about other pursuits? What about love? Previously in Atomic Robo: Having had his fill with science, Atomic Robo seeks adventure with Jack Tarot and his daughter Helen. The only problem is Robo isn’t really good with fighting. Or guns. In fact, if there was a scale to measure Atomic Robo’s intelligence, there would be an inverse relationship between that and his crime fighting abilities.

YOU WILL BELIEVE A ROBOT CAN FALL IN LOVE

Early on, Clevinger and Wegener made comments that they were trying to keep Tesla out of the picture, so when the scientist becomes an integral part of this volume, fans of the series had to know something big was up. And indeed we get to see the father/son relationship finally come to a head – and it is troublesome to read. Tesla wants Robo to stay put, Robo wants to do his own thing. They fight, and Robo leaves in a huff to go live with Jack and Helen. It’s sad to see the two part, but it is also nice to see Clevinger bring that real world situation into this book.

The other thing that was really surprising in this issue was to see Clevinger put Robo in a romantic situation with Helen. Here, Clevinger shows the two flirting, getting to know one another, and then finally sharing a kiss, which says a lot about the couple’s relationship. It also gives Robo some perspective on his relationship with Telsa, and by the issue’s end, the duo have made amends.

This is some fantastic writing. Not only do we have some very comical moments of Robo and Tarot trying to take down a giant rampaging robot, but the relationship moments, and villain reveal bring in the serious moments this series hasn’t used a lot until now.

A major part of this issue deals with the huge passage of time that occurs between the Tesla/Robo rift and their eventual reconciliation. It’s up to Scott Wegener to bring the six month montage to life, and he does it very well in six simple panels that tell readers everything about how the two characters deal with the situation. If Clevinger is a master of telling this story, then Wegener is the master at bringing it to life on the page. While I would still love to see more detail in the backgrounds, the staging of the action (and inaction) are handled very well. While I don’t have every issue of Atomic Robo handy, I’m pretty sure that a full page splash is not a common occurrence, so when an entire page is devoted to Atomic Robo’s first kiss… well… it is a special moment.

Few series have routinely received stellar reviews from me, but month after month, issue after issue, volume after volume, Atomic Robo has had the consistency in quality that other comic book series only dream of. If you are not a convert of Atomic Robo, I suggest you get with the program, drink the Kool-Aid, and rush out to the store right now and not only pick up this copy, but the four other collected trades, and then begin spreading the word yourself. Atomic Robo: Deadly Art of Science #3 once again earns 5 out of 5 Stars.