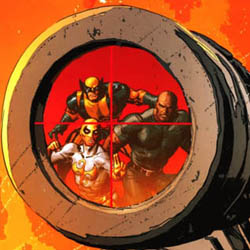 Or – “I Think I’ve Read This Retcon Before?” I think that the worst part about any shared universe is the tendency to tie TOO MANY things together, to wrap up loose ends that aren’t really loose in what seems to be the pursuit of a complete history.  The latest attempt at doing so was in the Ultimate Universe, where literally EVERYONE seems to be part of the Super Soldier Project, from Samuel L. Fury to Richard Parker all the way down to the guy who runs the Thing’s favorite delicatessen.  There comes a point where tie-ins actually collapse the ongoing story in an attempt to unify a “mythos.”  Why do I mention this here?  Read on, MacDuff… Previously, on New Avengers:  After the Siege of Asgard, outlaw Avengers commander Luke Cage was given carte blanche by Steve Rogers, a mansion by Tony Stark, and a mandate by Victoria Hand to form an official Avengers team.  He called in Spider-Man, Wolverine, his wife, his best friend, Doctor Strange, 1/4 of the Fantastic Four and a couple of blondes (including the worst character in the Marvel Universe) to round out his team, and their first meeting caused literal hell to break loose, costing Brother Voodoo his life.  On the plus side, though, Iron Fist got a spiffy new gold and ivory costume…

How Do You Make Sure Your Stakeout Is A Failure?

Bring along seven friend, including THE THING, and lean on a sign in what must be plain view…  Before we get to that tactical failure by team leader Cage, we get to see a pretty visually impressive nine-page sequence by Howard Chaykin, featuring the post-war adventures of Nick Fury, Gabe Jones and Dum-Dum Dugan, hunting down escaped Nazis…  and executing them in the street.  I realize that Nick is a soldier, but for some reason I was bothered by this bit, especially given that it takes place in 1959, FIFTEEN YEARS after Dubya Dubya Two.  Shouldn’t they have brought this guy in for trial and such?  Isn’t there a matter of international law involved in the murder of someone who has yet to be actually TRIED for anything?  And moreover, is there anything more embarassing that Bendis’ tough-guy soldier dialogue?  (Actually, there is, his magical wizard dialogue, as seen in part two of the issue, featuring as it does Doctor Strange.)  Chaykin’s art is a tour-de-force of period design, authentic cars and clothing, and of course, heads shaped remarkably like glass milk jugs, making for a good looking but really morally troubling sequence of events.

The rest of the book follows the New A’s on a stakeout as they surveil former Captain America villain Superia (re-imagined here as a six-foot-evil-sex-goddess, which is an improvement over her “battle-vixen-as-nun” costume from back in the day.)  An argument breaks out among the team, with Jessica Jones reminding the assemblage that this woman hasn’t actually committed any crimes or done anything more than move into a new storefront, while The Thing recommends his usual strategy:  Show up.  See what happens.  Clobberin’ time.  Ben, Spider-Man, Wolverine and Doctor Strange bust heads while Cage, Jessica and Iron Fist steal three truckloads worth of Superia’s stuff, making it ironic that our protagonists have stolen private property and started needless fistfights, while the villainess did nothing but look fine in a leather micromini.  Given that the issue started with cold-blooded murder, though, it’s a lesser problem than you might think.  Bad things happen, and the comtemporary portion of the issue ends with an Avenger badly wounded in a (needless and hero-induced) crossfire.  Cutting back to 1959, we see Fury get pulled aside by a General and told of his new gig:  Head of The Avengers Initiative.

The Verdict: Meh And More Meh

There are some nice parts of this issue, mostly character bits, including a sequence where Luke fails to hotwire the truck he’s trying to steal and instead picks it up and walks away, but mostly I’m left cold.  Nick’s actions during wartime notwithstanding, the flashback portions of the issue bother me as an attempt to bring “realism” to a comic book hero’s story, and there’s never a clear explanation of what is going on with Superia or why our heroes engage in unprovoked vandalism, theft, battery and mayhem.  Moreover, as I mentioned at the very start, I’m bugged by the retconned insertion of this “Avengers Initiative,” not just for the knot of continuity snarls I know it will start, but because it smacks of centralized world-building in a Marvel Universe that has long been known for versimilitude and sprawling narrative.  If this is the story of how Nick created the Age of Marvels, it has the potential to shrink that narrative down to a common originating point, something that seems inherently less fun and has much less potential.  Worse than that, by today’s standards, the Avengers couldn’t have formed much earlier than the mid 1990’s, leaving a 30 to 40 year gap of something.  I kind of hope we’re going to see what happened in between the heydey of the war and the modern Marvel Age, but my instincts (and solicitations) aren’t leading me that way.  Either way, New Avengers #9 consists of two seemingly unrelated vignettes full of mixed messages and portentious happenings that doesn’t really stand up as a singular narrative, earning a troubled and disappointed 2 out of 5 stars overall.  I very much hope to be surprised where this arc ends up going…

Faithful Spoilerite Question Of The Day:  Am I overthinking it?  Is it okay for Nick Fury to gun people down in the streets if he knows they did something wrong a lifetime before?