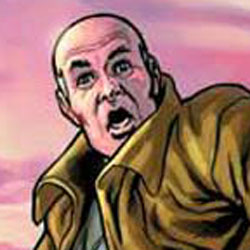 It’s been a while since we’ve checked in with Buck Rogers, and though his monthly adventures are on hold, the Annual gives readers, and Buck, the needed closure. Previously in Buck Rogers: “The year is 1987, and N.A.S.A. launches the last of America’s deep space probes. In a freak mishap Ranger 3 and its pilot Captain William ‘Buck’ Rogers are blown out of their trajectory into an orbit which freezes his life support systems, and returns Buck Rogers to Earth five-hundred years later.” Or something like that. The story differs depending if you are a comic book fan, or one of those that constantly drooling over Erin Gray.

I realize Scott Beatty is all over the Sherlock Holmes book right now, but I’m still surprised he wasn’t the one who landed this annual assignment. Even with Beatty off this particular issue, the story was a good one, filled with some sad moments, killer robots, and the wry Rogers humor. Here, Brady and Brownfield give Buck a bit of perspective on his situation – it’s his birthday and the reality of his situation is finally sinking in – he’s never going home. It’s only when Doctor Huer makes him aware of an annual music transition he receives does Buck get out of his funk and goes forth to investigate, knowing deep down that it is a message from his long dead girlfriend.

The signal takes Buck and Dr. Huer to a derilict, but still functioning data storage center, where Buck does indeed find a recorded message from his girlfriend Ashley. The message, recorded near the end of her life, tells Buck that even though he’s away from friends and family, he needs to get on with his life. And that’s when the killer robots and roaming band of cannibals show up. The gun fight and flight to safety gives the story the action that is needed, and the closure Buck has, allows this chapter of Buck’s life to end, and the next heroic story to begin.

It’s good to see Rafael’s style back on the book, and his art still works. There are a few times when faces look a bit skewed, and expressions are recycled more than a few times throughout the issue. On the plus side, a majority of the issue features Buck and Dr. Huer, which allows Rafael focus his attention on making those pictures look the best they can.

Yes, the story is full of schmaltz, but is handled very well by the writing team. If I didn’t know better, I’d say Dynamite Entertainment waited until the week before Valentine’s Day to release the annual, as the love story that flows through the issue pulls on the heart strings. Overall, Buck Rogers Annual #1 is worth checking out, and hopefully there is enough interest to get a second series from the publisher. Buck Rogers Annual #1 earns 3.5 out of 5 Stars.