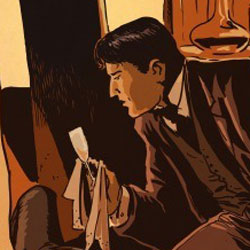 When it comes to great detectives, Sherlock Holmes ranks above the likes of Batman, Ralph Dibney, and the rest of the four color sleuths. Dynamite Entertainment delighted with their previous Sherlock Holmes series; will they repeat the success with Sherlock Holmes: Year One? Previously: Sir Arthur Conan Doyle created a great detective in the form of Sherlock Holmes. Through the years readers became familiar with Holmes’ past, he relations, and crimes solved through the pen of Dr. John Watson. But do we really know how Holmes and Watson met?

THE BUTLERS DID IT

Though not an actual pairing of Holmes and Watson as a crime solving team, this issue does a great job of introducing the key characters in one of the greatest detective teams in history. Just as Holmes’ stories were retold through the eye of Dr. Watson, this story is told via double flashback as Watson recounts the tale that Holmes spins to the police after the crime has been committed.

As a poor broke student, Holmes and a fellow student take jobs as butlers for a hoity-toity party of the upper class. Before the second meal is served, Holmes deduces that the servants are in cahoots to drug the party goers and rob their homes while they sleep off the effects of laudanum. Fisticuffs and a fall from a tower all occur before the police show up, and much to the chagrin of the police, Holmes, battered and bruised, is still able to lead them directly the gang as they are about to board a ship to the New World.

It is an interesting tale, but it is one that focuses more on action than clues dropped throughout the issue. As readers, we are only given a glimpse of Holmes’ deductive skills, because we are only given the bits we need to know from the title character. Over the last couple of years, I’ve become a fan of Scott Beatty’s work in Buck Rogers, and The Last Phantom, but I can’t help compare this Dynamite series with the last, and the fantastic writing of Leah Moore. Beatty is a great writer, but he is no Moore. Still, the story is engaging, and the action is thrilling enough to keep those readers who don’t really care about a thinking man’s story entertained with the gun play and fighty-fighty.

TOO MUCH OF THE DYNAMITE STYLE

As I wander from publisher to publisher over the years, it is easy to see companies that have a house style, and those that let the artist run wild and free. Dynamite appears to be one of those companies that have a particular look – especially when it comes to the use of heavy inks and shadows. The style itself isn’t bad, but the issue did come off rather muddy because of all the dark tones throughout.

Daniel Indro does serve up a lot of action on the page, but I noticed he tends to favor wide-medium and long shots. This is fine when there is a lot of action going on with a large number of people, but during the quiet moments, there’s a great deal of empty space. And for a tale that takes place during the Victorian era, the rooms seem rather sparse. I can’t help but wonder if this is because Indro doesn’t like drawing faces in close up, or if that he just favors the extreme wide-shot.

I’m a sucker for Year One stories, as I like seeing heroes and characters we’ve grown to love fumble and make mistakes. I don’t even mind it when the writer slips in cameos and nods to future events in the heroes life. Sherlock Holmes brings all this together nicely and the final result is worth a look. Watson is intrigued with Holmes enough to stalk him to find out what he is all about, and I’m interested enough in Year One to check out the next issue when it arrives. Sherlock Holmes: Year One #1 earns 3.5 out of 5 Stars.