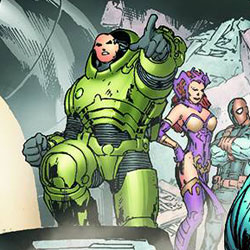 We’ve seen the awesome trailer, some of you may have already played the game, but do you know the full story? That’s what DC Universe Online Legends #1 hopes to clarify as universe building goes into overdrive. Previously in DC Universe Online: A game was created designed to bring the gamers of the world into the DC Universe where they could train under heroes and villains as they attempt to take back the future.

LEX LUTHOR, YOU WERE PLAYED LIKE A FINELY TUNED FIDDLE

Though I haven’t had a chance to purchase and play DCU Online, I have been glued to the various movie quality trailers/cut scenes released from DC Comics and Sony Online Entertainment. The production value is astounding, and though everything you need to know about this game is contained in those clips, there is still a lot of backstory that can be told.

And that’s where this book comes in.

In this first issue, we see what happens immediately after Brainiac invades the planet, which includes Lex’s escape, and eventual recruitment of heroes and villains to build a resistance to Brainiac and his Exobyte swarm. Readers also get a look at what led Luthor to betray his planet, and it is plotted well.

Marv Wolfman and Tony Bedard handle a company wide “crisis” so well, it’s like one of them has dealt with major world ending stories before. I like the style used to tell the story, and there is a sense of urgency and panic in the way the story flows from the cover to the closing page. Obviously, there are many plot points that are telegraphed pages ahead, and you know at some point Lex travels to the past to change the playing field.

There’s nothing wrong with the way the art team handles art duties in this issue, but with four people working the pen and pencil in this issue, there are going to be inconsistencies and a few jarring moments as readers turn the page. And while the staging of the characters and framing of the virtual camera gives a few interesting looks at this mega event, a lot of the time it’s simply average.

My biggest concern in regards to the art, is there are several times when the male and female characters look alike. This is readily apparent on the final splash page where Power Girl and Black Canary have the same face and build, with the only difference being the hair length and costume.

I doubt DC is putting this entire event into continuity, so you have to take this book for what it is worth, a gimmick to get the video game kids to read a comic book, and to get the comic book reading kids to play a video game. This isn’t a new way to generate sales, Atari did the same thing way back in the day with Atari Force (and others). There’s nothing terribly wrong with the issue, it is engaging and interesting, so it is worth a look. DC Universe Online Legends #1 earns 3.5 out of 5 Stars.