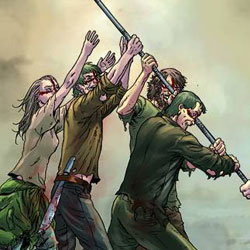 Previously in Crossed: Family Values: The Crossed suddenly arrive on the scene, carving large swaths of obscene violence across the landscape of humanity. The story focuses on the Pratt family and the small group of survivors who slowly but surely succumb to the growing legion of Crossed. Any living creature that comes in contact with fluids produced by the Crossed is almost instantly transformed into a twisted reflection of their former selves. Humanity is ejected and primal evil is unleashed, manifesting itself in a scarification across the face of the infected, forming the image of a cross. Addy is one of the remaining survivors of the Pratt family, taking it upon herself to protect those in her charge from the personification of Evil…Crossed.

When it comes to depravity and the deterioration of the human condition, few have a better grasp on that subject matter than always-controversial comics scribe, Garth Ennis. The man responsible for Preacher, Punisher and The Boys has no problem pushing boundaries and stomping his heavy heel upon conventional storytelling. In 2008, Garth Ennis unleashed the world of Crossed in his self-titled, 10-issue maxi-series. Those with delicate sensibilities need not apply, so be warned: the contents of those 10 issues will disgust you. Soon after the series’ conclusion, a rather successful endeavor for publisher Avatar Press, word came that another story from the world of the Crossed was being birthed. Writer David Lapham unleashed Crossed: Family Values in 2010 and the question of ‘how exactly do you follow Garth freakin’ Ennis?’ transformed from a question into an answer. The lesson is simple: don’t underestimate the mind of David freakin’ Lapham.

Depravity abounds throughout the 7-issue Crossed: Family Values series, but issue #7 finally delivers the conclusion to what can best be described as a breathtaking marathon of horrific sadism. Following Ennis’ lead, Lapham delivers unbelievably abhorrent behavior from the Crossed, but less predictable is the unpalatable conduct from the human population.  Night of The Living Dead director George Romero has explored this theme within his films, however, to Lapham’s credit, no prior metaphor has been quite as dark and twisted as the one we find in Family Values.  Is the arrival of the Crossed endemic of prophesized ‘end times,’ as described in religious literature? Is humanity facing against inhumanity as a result of our world’s transgressions against one another?  It’s not just Crossed who rape, kill and torture. As a matter of fact, more casualties result from human on human violence in Addy’s group of survivors.

You’re unlikely to find any fictional family with more inherent dysfunction than the Pratt family. The family’s patriarch is an all-American dad who is not only an anchor of his community, but he also finds time to invoke God’s will as justification for repeatedly raping his daughters. His blushing bride, our matriarch (only by blood) takes care of the household and spends a good amount of time imitating an ostrich; burying her head in the sand rather than confronting the insurmountable evidence that her daughters are the victims of sexual abuse. Earlier in the series, Mom finally steps up to the plate and locks herself into a makeshift jail cell with Dad. She intentionally infects herself with tainted Crossed blood while telling the badly beaten and raped Addy that she must survive and lead the family. Seconds later Mom has fashioned a very large knife into an artificial phallus, professing her lustful feelings for Dad whilst driving his open mouth over the length of blade, killing him instantly in the process.

In this final installment of the series, Crossed Mom has since assembled a group of like-minded deviants to track down her remaining family members. It seems that she’s intent on recapturing the glorious days of yore. Let’s say that in her new condition, Mom has many similar character flaws that Dad had been manifesting for years. Some scenes involving Crossed Mom vs her sons are… disturbing. To Lapham’s credit, the deviant scenarios within Family Values take the Ennis-spawned principals and apply them on a whole new level of poor taste.

Lapham Has Scalpel, Will Travel

It must be clarified that the book is not just hyper-sexualized violence. It’s a book about slowly losing one’s humanity as your moral compass is forced to adjust to environment. The hunters and the hunted employ thoughtful tactics and maneuvering techniques.  While the violence, gore and sadism is completely over the top and amplified to levels of absurdity, the quiet strength of our group of survivors keeps the story grounded. This balancing act requires skillful precision, and Lapham keeps up his end of the bargain.

Babies are born, parents die, and some are resurrected as Crossed. While it seems impossible to imagine, given the prior 6 issues, a satisfactorily positive outcome is delivered by the conclusion of this final issue.

Bottom Line: BUY, If You Have The Stones

Look, this book is messed up. You will see things that you are unlikely to ever forget. Some of the most disgusting and deviant scenarios will cause you to question the merit of such storytelling devices. If you have the fortitude to continue forward, you’ll find that the scenes in fact, serve the story. It’s an unsavory path, but the journey is sure to evoke your emotions. For my money, this is one of the best mature properties being produced in comics. If you dare, I highly recommend Crossed: Family Values #7, earning 4.5 out of 5 stars.