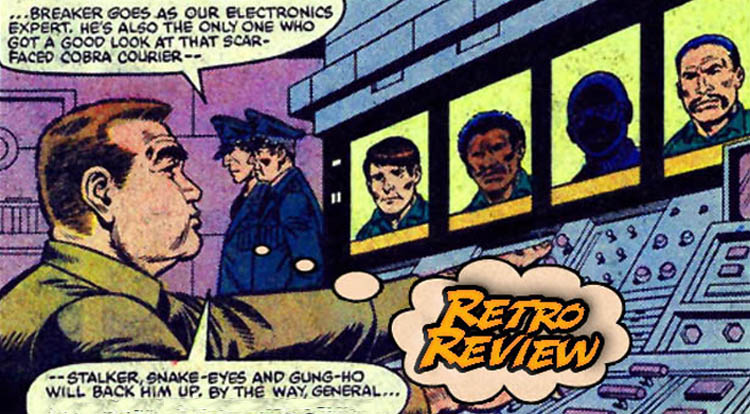 I clearly remember the thunderbolt that was G.I. Joe on my personal preteen cultural zeitgeist circa 1982.  I’d had some dealings with comic books, but issue #1 of G.I. Joe was a MUST-HAVE.  The cartoon commercials led to purchase of the toys led to obsessive watching of the cartoon led to trying (and failing) to get my first comic book subscription.  I still fondly remember hangining out with my cousin Elwood in my grandfather’s boat, deciding that nobody got to be Snake-Eyes and instead making up our own Joe team members.  There are really only three things you need to know about G.I. Joe for the purposes of this review:  The original 13 team members will always be the best, The Baroness will always be super-hot, and the movie never happened.  Repeat after me: IT.  NEVER.  HAPPENED. Previously, on G.I. Joe: “G.I. Joe is the code name for America’s daring, highly trained special mission force. Its purpose: to defend human freedom against Cobra, a ruthless terrorist organization determined to rule the world!”  To that end, representatives of all branches of the military have come together with spiffy code-names and futuristic equipment, taking on the menace of Cobra wherever it raises it’s shrouded head in agony…  or something.  By the time this issue dawns, the Joe team has become quite adept at busting Cobra’s schemes, to the point where they are willing to engage in a runnin gbattle through the street of San Francisco (though, sadly, Karl Malden is nowhere in sight.) Setting the story squarely in the 80’s, the Joes manage to rip the car of a punk rocker in half, and the chase ends with the Cobra van rear-ending a Pinto, which then predictably blows itself to smithereens.  Clutch takes a bullet, and Breaker knocks over a couple of Hell’s Angels unidentified and non-copyrighted motorcycle gang members, who starting beating him to a pulp.  Scarlett, the Joe team’s resident badass, brings that confrontation to an abrupt ending… What, indeed, Breaker?  Turns out that whatever is going on, it’s going on in a small banana republic called Sierra Gordo, where a hand-picked team of Joes seeks out the mysterious Naja Trading Corporation, to try and figure out what in the world Cobra is trying to do.  This being a stealth mission, naturally, it involves Stalker dressing like Colonel Sanders and Breaker in a Hawaiian shirt and bermuda shorts.  ‘Cause that’s inconspicuous…  Snake-Eyes and Gung-Ho watch from the nearby jungles, and are surprised by the sight of a familiar face… I really love the fact that Doctor Venom so clearly looks like Christopher Lee as James Bond villain Scaramanga in this sequence.  Stalker blows their cover, a firefight breaks out, and it looks like the Joes are going to come out on top when another quarter is heard from… The mysterious Mr. K. Winn turns out to be a not-all-that-clever pseudonym for Kwinn The Eskimo, an old acquaintance of Snake-Eyes and company.  Being a mercenary, Kwinn will work for whomever signs the checks, though he has a strange code of honor all his own (and contrary to some reports, his presence does not cause anyone to jump for joy.)  Dr. Venom sends the eskimo off while he questions Snake-Eyes, but Kwinn realizes quickly that a mute man can’t be made to talk.  Unfortunately, Dr. Venom has already beaten Snake-Eyes to death before Kwinn arrives, and they leave his body in the burning remains of their building… When I read this at the tender age of 12, I was overcome with sadness and disbelief at the thought that Snake-Eyes (who was at that time the coolest member of the team, or so I believed) was gone, and found this whole sequence to be immensely satisfying storytelling.  Even now, I very much enjoy how writer Larry Hama structured Doctor Venom’s realization as the boat pulls away, flashing back to a previous issue where he used his Brain-Wave Scanner to read the masked man’s memories.  Cobro mainstay The Baroness is not happy with Venom’s carelessness, but the not-so-good Doctor isn’t worried… The mystery of what exactly is under that black mask is one of the things that I remember most strongly about the early issues of this title, and the eventual reveal is naturally disappointing.  It doesn’t help that, much like Doctor Doom, the creators aren’t entirely sure whether his head looks like hamburger, or just has a big scar like an extra in a World War II flick.  The Joes bust out, and Snake-Eyes heroically stays behind to take out the Cobra bunker.  Cue the Baroness with a nice big, steaming cup of “Death From Above!!” For the second time in the space of one issue, Snake-Eyes is lost and presumed dead, and I clearly remember how shocking the climax was, and how very much I wanted to find the next issue and see how it all panned out.  In fact,  believe that this is the first time that a comic cliffhanger compelled me (nay, FORCED me) to come back and see what happened next.  I’m actually pretty impressed with how well the story holds up, combining spy-genre tropes with a muted soldier vibe, and to Hama’s credit, the later superhero/super-ninja story creep has yet to take over G.I. Joe at this point.  Snake-Eyes stalking to the bunker with a rifle is still an image that is burned into my brain, and in my rereading of the book, I remember certain passages of dialogue verbatim THIRTY YEARS and countless comic books later.  G.I. Joe #12 is an example of a book that could do damn-near no wrong, and serves as a clear reminder of exactly why the team’s adventures were so catalyzing in the summer of ’82, earning a two-fisted 4 out of 5 stars overall.

Faithful Spoilerite Question Of The Day:  What cliffhangers really piqued your imagination and brought you back for more?