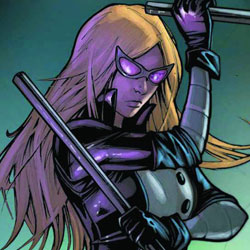 Spider-Slayer is attacking, the shuttle is in jeopardy, and the entire Jameson clan is in danger. Seems a bit much for Spider-Man to handle all by himself. Previously in The Amazing Spider-Man: Alistair Smythe, the Spider-Slayer, has it bad for J. Jonah Jameson, and has sworn to kill anyone and everyone Jameson holds dear. Though Spider-Man and Jameson have never been close, Peter does put his life on the line, even if it means climbing up the side of a booster rocket while the shuttle approaches the troposphere.

HIT ‘EM IN THE FACE REPEATEDLY ‘TIL THEY STOPPED GETTING UP

With the Slayer Swarm spread out all over the city, attacking the Jameson extended family on a grand scale, it seems unlikely that Spider-Man will be able to be in all places at once to save everyone. He’s having a hard enough time dealing with The Scorpion and his new upgrades that allow him to survive a terminal velocity fall to Earth. So it shouldn’t come as any surprise that he calls in The Avengers to help him out. But the team that arrives isn’t Captain America, Iron Man, or the big guns that Jameson thinks should show up. Instead, Luke Cage, Iron Fist, Jewel, The Thing, Mockingbird, and a brief appearance by Squirrel Girl begin to kick butt and take names. But it seems the swarm has a Spider Sense of their own, which forces Peter to leave the fight to whip up a solution, and that puts him front and center with his new boss.

As this story progressed, I had a weird feeling that this wasn’t Slott’s best work, and it wasn’t until after I finished the issue that I saw he only plotted the issue; leaving the script to Fred Van Lente. Now Fred Van Lente is a good writer, and while this chapter was interesting, it didn’t have the same sparkle as issues I’ve read in the past. The off feeling may have also been in part to The Avengers showing up – I was most disappointed that Spider-Man had to have his butt pulled out of the fire instead of coming up with a solution on his own, but I can live with it.

THE ART OF SQUIRREL GIRL

The art by Stefano Caselli continues to pull me in, and at this point, I’ve almost forgot about that other guy that I constantly swoon over. Caselli’s does capture some interesting moments in the fighting action, but some of the time it seems like we’re looking characters standing frozen instead of in the thick of battle.
The inking is also interesting as a lot of the time the scratchy rough pencils appear to show through on the character, while the body is heavily outlined. It’s a different kind of style, but one I’ve noticed several artists using these days.

While the fighty-fighty is exciting, and the battle seems larger than life, I’m really more interested in the final page conflict between Max Model and Peter Parker than if Luke Cage is going to bring the beat down to a guy dressed as a flying ant. Overall, the issue is worth a look and it is still one of the few issues I’m looking forward to on release day. The Amazing Spider-Man #653 earns 3 out of 5 Stars.