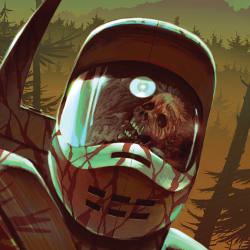 Matz and Luc Jacamon explore the implications of what happens when greedy corporations are in charge of our armed forces. Are these wars being fought for peace or for profit? And does Cyclops #3 live up to the terrific debut issue? Read our review to find out. Previously in Cyclops: Douglas Pistoia has settled into his role as a corporate created national hero and is reaping the benefits of the position. Meanwhile, Multicorps is closely guarding what footage and news from the war is being shown to the public. However, Pistoia shows his first signs of doubt towards Multicorps after questioning the morality of some of their violent decisions.

Cyclops has easily been on of the most unique and refreshing books on the shelves this year. It has a great blend of real world characterizations, cutting social commentary and sci-fi flash. Built upon the premise of a corporate run military using war for profit, Matz has gone to great lengths to make Cyclops not only entertaining but timely as well.

With this third issue, Matz concentrates on the unrest that citizens are starting to feel about Multicorps. The first two issues saw an affable reception towards the machinations of the Multicorps business practices, however this is the first time that reporters and protesters are making their frustration known. The façade of Multicorps is starting to crumble just a little bit and Matz is showing all of this happen very gradually. First starting with some small grumblings in this issue and then presumably building up during the rest of the series.

Douglas Pistoia’s character begins to evolve further in this issue as he becomes increasingly concerned with the business ethics of Multicorps and just how real the wars that he is fighting in really are. There is a wonderful scene where he goes into a bomb targeted building in order to save a woman and her child from certain death. Pistoia acted naturally in this scene and did exactly what he thought was the right thing to do. He returned home to even more fanfare from an adoring public. Even though his fame ballooned afterwards, Pistoia became increasingly more suspicious when his girlfriend asked if the woman could have been planted there in order to make him look more heroic on camera. This is the turning point for Pistoia as he begins to ask questions about Multicorps that he never has before.

Matz digs deep into what purpose celebrities serve in our country and why people latch on to them so vehemently. When Pistoia says, “If ours is a society of voyeurs, lies and demagogues: it’s not my problem” that is the most telling line of the issue. This story is about the voyeuristic nature of reality TV and how it blurs the line between what is genuine and what is false. Matz takes this one step further and adds a real war to reality TV.

While this issue is much slower paced than the first two, it does set up some interesting developments as Multicorps isn’t portrayed as the invincible machine that they were early on. This is another vital part in what has been a great series so far.

The Art Is Not As Flashy But Still Great

Luc Jacamon’s art has been the highlight of this book the first two issues, however because this issue has a slower pace his art has less chance to be as flashy as it was. Most of the issue is talking head scenes that don’t showcase Jacamon’s art in the best way. That fact aside, he still crafts conversation scenes with a delicate and imaginative touch. The way he depicts body language and facial expressions is greatly improved in this issue and if you were to take the dialogue balloons away, Jacamon’s art alone would still be able to tell a great story. Jacamon is also one of the best at crafting beautiful cities, technology and architecture. Small glimpses of Florence in the background of a conversation scene transport the reader right into the city. It’s the small touches that make this art pop. Matz and Jacamon are easily one of the best creative teams in all of comics.

BOTTOM LINE: Just Get It!

Get this book now. Get this issue, get the first two issues and then get the rest of the series as it comes out. It’s one of the most refreshing books on shelves and it reads like more than just another issue of a comic. This can be a great story for any person that is interested in the concept of celebrity, war and profits. This is an important book in a world where most comics shy away from social commentary.