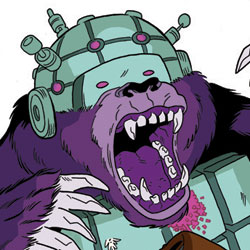 Mad scientists are a disease and this March, fans will meet the cure: THE INTREPIDS! Image Comics continues to promote the best new talent by introducing this six-issue miniseries by the up and coming creative team of writer Kurtis Wiebe and artist Scott Kowalchuk.

THE INTREPIDS are a collection of runaway homeless teenagers that have been taken in and cared for by an aging inventor named Dante. Applying his brilliance, he crafts marvelous technological contraptions and with his vision and help, the motley crew he has assembled agree to use his gadgets for the betterment of mankind. Together, they combat tyranny and stop madmen from bringing harm to the world!

“THE INTREPIDS is a James Bond-style action-adventure that takes mad science to new heights. It’ll be wild, it’ll be action packed and it’ll have sexy dames with rocket packs!” says Wiebe. “It’s really our best case scenario to be publishing this book with Image. They’ve been producing some of the most engaging work in comics.”

“Kurtis and I have had a lot of fun developing this book,” adds Kowalchuk. “That fun will shine through. We’re extremely proud of the series, and we hope the fans will have as good a time with it as we do!” Originally announced with the title of RAT BASTARDS, THE INTREPIDS reverted to the series’ original name to avoid a trademark conflict with a previously published title.