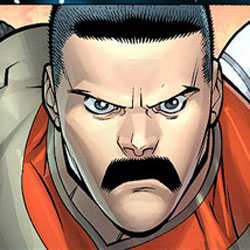 If you thought the Viltrumite War was bloody in the last issue of Image Comics’ Invincible, then you will certainly be taken by surprise in what Robert Kirkman has cooked up for the next chapter in the life of Mark Grayson. Previously in Invincible: Led by Invincible and his father Omniman, the coalition took the fight to the Viltrumite home world, literally destroying it in the onslaught that ensued. With numbers dwindling, Freddie Mercury took the remaining Viltrumites and disappeared into space. It didn’t take Mark long to figure out where they went… EARTH!

WELL THAT WAS UNEXPECTED

I’ll say this for Robert Kirkman, just when you think you have his writing style nailed, and you can predict three issues out what he is going to do next, he pulls a swerve. The scariest thing in the known universe is the dark recesses of the mind, and as Omniman, Mark, and Tech Jacket spend a week headed back to Earth, the worst things imaginable go through Mark’s head; the planet in ruins, loved ones dead,Thragg lording over the chaos as the new ruler of Earth.
Except when they arrive, everything is perfectly normal.

And this is where Kirkman pulls a stalemate I didn’t see coming. Instead of destroying everything Mark loves, the Viltrumites have taken over the planet quietly. In exchange for not destroying the Earth, the Viltrumites agree to live among the humans, interbreed, and not get involved. Thragg’s thought process is in a thousand years, they will have rebuilt their numbers, and at that time they can begin their battle again. It’s a weird gambit to play, but the only option is for the Earth to be destroyed. Mark and Omniman agree, and the stage is set for what is to come.
I really wonder what Kirkman has planned in the long run for these characters. Those who want blood and guts may get their wish in a dozen issues or so, but I think Kirkman showed his hand when he had Omniman go on at length about how his time on Earth changed him, how human emotions became his emotions, and I wonder if in the long run the Viltrumites won’t breed themselves into extinction instead, being replaced by very strong humans. I doubt the series will ever last 60 years, but this may be Kirkman’s way of saying, “fear not, people of Earth.”

THE BEST AND THE WORST OF OTTLEY

Before you get too bent out of shape, when i say the worst of artist Ryan Ottley, I’m certainly not talking about his style – the man knows how to draw some powerful images. What I mean by the worst is once again, Ottley draws up some of the worst imagery that flashes through Mark’s mind as he wonders how bad it will be when he gets home. The carnage is hard to look at as Ottley has never been one to hold back.

This is a huge story changer for the Invincible series. Kirkman is able to twist the tale to his advantage, while giving everyone what they want; blood shed, happiness, and a continuation of a great hero. Ottley delivers another bang up job on the art, and Image gets kudos for releasing this series day-and-date on the iPad. You can’t go wrong with Invincible, and this issue is a good one, earning 4.5 Stars out of 5.