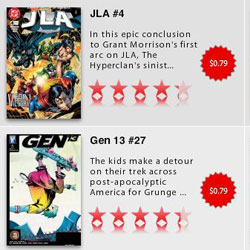 Just over a year ago, Steve Jobs got up on stage and presented to the world the iPad. From the moment it was unveiled, I knew the way we consume comic books would be changed forever. By the time the god-device arrived in April, a slew of digital comic apps were ready, and my digital collection began to bloom.

But as we approach the one year anniversary, it’s time to look ahead at ways the industry can attract more readers to the digital format and enhance the reading experience for those already on board.

Marvel, DC, Archie Comics (and others) have all announced day and date releases of some of their books. With the exception of Archie, which is putting all the core titles on a digital reader, the same day they arrive in stores, the offerings from other companies is rather sparse.

Wired magazine learned a valuable lesson with their digital issues. While print editions of the magazine have fallen, they have been steady the last couple of years. The digital editions haven’t sold as much as they expected (30,000 a month or so), but those 30,000 represent more readers than they had previously. Digital comics probably aren’t going to replace print anytime soon, but as more readers jump on portable devices like the iPad and PlayStation Portable, having more day and date releases would only encourage new readers to buy into the latest stories.

I love reading new comics when they are released, but with so many cool titles available, a subscription service would be nice. If I like reading Ultimate Thor, I can sign up and pay for 12 issues in advance, but instead of a notification that new issues are available (they way it is done now), the issues would automatically download to my digital comic reader.

This isn’t just a digital comic book problem, all digital magazines are suffering from lower than expected sales because their digital delivery requires the user to actively seek out new releases. We are generally a lazy bunch, and if we can have something delivered directly to us, we’re much happier in the end. This is why RSS subscriptions for podcasts made the format popular.

On February 2, News Corp and Apple are expected to announce a newspaper subscription service that should spread to other magazine and newspapers, and theoretically to digital comic apps as well.

Since its release, I’ve purchased hundreds of comics through the ComiXology app, and as I build the digital collection, the one thing that has become apparent is the need for better browsing. Sure, the search function is nice if I’m looking for a specific issue, series or arc, but when I flick through the cover view, I’d like the option of having the 90+ Batman issues condensed into one image of the most recent issue, and if I want to read me some Batman, a simple tap would show me all the issues available. Beyond me simply being lazy and not wanting to use the search feature, it would be nice to also group comics by volume and story arcs as, too.

If publishers want to push their digital initiative, one way they could encourage the growth of the electronic edition, is to put a code inside the print edition that allows the reader to get a free electronic copy, too. Movie studios are already doing this with DVD releases; you buy the disc, get a digital edition from iTunes for your iPhone or iPad for free. There would need to be a way to secure the code to keep some schmuck from walking into a comic book shop, and simply copying down the access key, but I’ll leave that solution up to the brains at the publisher to figure out.

IDW Publishing and Dark Horse Comics have announced and released stand alone apps to read specific trades and volumes of their popular titles. These apps create a way for readers to buy into their favorite series and have quick and easy access without having to open a different app and sort through the competition. This thinking isn’t just a convenience for the reader, it also cuts out one of the middlemen, thus giving the company a way to sell and issue for $1.49, instead of $1.99.

I appreciate the thought behind it, but I’d really wish this would stop. I don’t want my screen cluttered with trades and volumes that I then have to flick through to get to an app that I really need to use. Similar to my desire to reduce clutter, the Keep It Simple theory would work wonders here.

None of the publisher or digital distributors release weekly announcements anywhere that informs the public where they can go for the exclusive titles. This exclusivity is not well thought out at all, and it’s almost the equivalent of the companies shooting themselves in the foot during this initial stage of adoption.

Companies should either end exclusivity, or at least make it a point to actively announce where titles and issues can be purchased.

One of the things that attracts many to trade paperbacks and collected volumes is the bonus content not available in the stand alone issue. It wouldn’t take a lot of extra effort on the part of the publisher to add bonus content into the digital editions as well. Including all the variant covers would be the easiest no-brainer first step.

If a publisher really wanted to be aggressive in getting readers to jump on the digital bandwagon, adding tons of bonus content would be a way to do it. Think of being able to read an issue not just in the final format, but to be able to toggle back and forth between a script only view, rough pencils, inks and final color versions as well. Not only is there entertainment value in this, but educational opportunities as well. As much as some creators like to blather on about how great they are, having an audio commentary track could be something to add down the road.

There isn’t a day that goes by that I’m not reading a comic on my iPad. I’ve spent the last year using the device every day, and while there are some very cool things going on right now in the world of digital comics, it’s time to take digital comic development to the next level. Are all of these suggestions and ideas slam dunk winners? No, but they do open the door for discussion, and I wouldn’t be surprised to find out some of these items already being put into development.