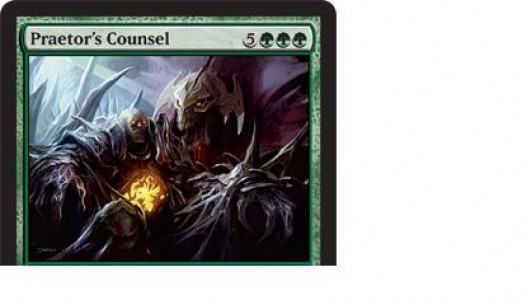 The war for Mirrodin has escalated. The Mirrans have discovered Phyrexia’s presence and are now struggling to unite as a whole and survive. This weekend at the Prerelease we will get to see the blown conflict firsthand as you choose which side you’re playing for. We’ll have more on this when I get back from our big midnight event, but first Wizards of the Coast has sent us something awesome.

Usually, I would say that opening up a pack outside of a limited event is a waste of a good booster. However, since we have been sent three booster packs to preview (that’s right we got an intro pack, which has a 60 card preconstructed deck and an additional 15 card booster, and two extra boosters to boot) I think I’ll make an exception.

For those of you who visit Magic’s main website, and even some who just follow the general news, you may know of the Great Designer Search 2, for those that don’t, go here. A challenge or two ago, the remaining contestants were tasked with creating the perfect pack, a pack that shows off exactly what the set is about and to be evaluated as such. Thanks for the idea guys. This guy was one of the earlier previews, but man is he still amazing a 5/5 for 5G that gains life whenever an artifact dies? Color me impressed.
Common 2 Spire Serpent
Here we get a card that has only been in the spoilers, fun. The serpent for the set, he gets turned on by Metalcraft, becoming a 5/7 for a mere five mana. Cool.
Common 3 Spin Engine
An decent artifact creature with a colored activated ability. OK, 3/1 for only three and I can pay R and tell things they can’t block it, I’d draft that.
Common 4 Gnathosaur
This guy is HUGE! 5/4 for 4RR and I can give him trample. That pleases my inner Timmy.
Common 5 Shriekhorn
This is going to be one of the less popular cards. A single drop artifact that can mill six cards over three turns, big whoop right? Not to me, it’s mill is only limited by charge counters and I love me some proliferate.
Common 6 Glissa’s Courier
A 2/3 Mountainwalk for only three mana, in green? Honestly, not the best, but any limited player should be happy to pick one up when it makes its way back around the table.
Common 7 Ichor Wellspring
This has my three favorite words in Magic on it, “draw a card.” I love cantrips. So I pay 2, I get an artifact to power my Metalcraft and a card to replace it. Then, when I no longer need the extra artifact I just find some way to get rid of it and have another card. :D
Common 8 Serum Raker
My first real disappointment. He’s a 3/2 flier for 2UU, which is good, but he makes everyone discard a card when he dies. Sure, I’ll play him, but as a blue mage, I tend to have cards in hand more often than not and really don’t like discarding them, so he may sit quite a bit here.
Common 9 Flayer Husk
I was wondering if I would get a new mechanic in the pack. Living weapon lets an equipment produce a token that it then becomes attached to when you get this onto the battlefield. This is the easiest use of the mechanic, and I like it. I get a 1/1 for 1 and can later give that +1/+1 to another creature for 2, cool.
Common 10 Flensermite
Meh, he’s interesting, but I don’t think the lifelink plays as fun here as it did with say deathtouch. Also, we have better two-drops in Scars, everybody wave to Plague Stinger.
Uncommon 1 Treasure Mage OK, this guy is cool. An obvious riff on Trinket Mage, instead of getting really small stuff, he gets really big stuff. “You need that Steel Hellkite to win? Let me get him for you. Or how about we go back and get us an Obelisk of Alara?” Treasure Mage is my friend.
Uncommon 2 Into the Core
Or, as I’ve been calling it Double Shatter, for twice the cost of Shatter we get to hit two artifacts and there exiled instead of destroyed. Probably won’t hit constructed play, but I know I’ll pick it high in a draft.
Uncommon 3 Mortapod
This second Living Weapon card lets us throw our creatures at someone for a bit of damage. Fantastic on the flavor side and should see some limited play; I can throw an infecter at you for that last counter? Sure.
Rare, or should I say Mythic Rare? Praetor’s Counsel
This eight cost sorcery is amazing. I get everything that has already been used back, and if I have eight mana that should be a fair amount of cards, and I have a spellbook my opponent can’t get rid of. I think I’m sold.

The rest of the pack gives me a Myr token, :D, and a swamp. Apparently WotC decided to print new basic lands for the set, I guess to show the extant of the war. Well, if I was getting a basic land it may as well be new anyhow.

The first pack was awesome, and now I’m going to go play with the rest of the cards we got. I’ll let you know how that goes in a bit. So far, we’re firing on all cylinders, but like I said, I love me some Previews.