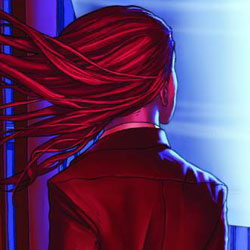 When stories offer up a twist, there are two ways it can go – in a positive direction that drives more readers to the story, or to the negative that causes the current readership to wonder what the hell is going on, question their sanity, and possibly leave the series completely. Which direction does Morning Glories #6 go? Previously in Morning Glories: Students with extraordinary talents and the exact same birth date are recruited to the prestigious Morning Glory Academy. But strange things are afoot at the MGA and the new recruits know they need to get out… or else.

Image Comics may say this issue is a great jumping on point, but that is only if you’ve read the reviews on sites like Major Spoilers, frequent message boards, or listen to your friends drone on incessantly on how great the series is. Even if you are knowledgeable on what is going on in the story so far, this issue tosses you in the blender and leaves you spinning.

Instead of finding out what happens to Casey and her friends, this issue focuses on Julie Hayes who is being recruited by an institution that just so happens to have a glowing spinning tub in their basement, too. A lot of time is spent revealing Julie’s history; her love for her father, the tragedy that caused his death, her run from the law, and eventual recruitment, and it isn’t until the final page that we see the person doing the recruiting is none other than Jade, much older than when we last saw her.

The entire issue feels off kilter as the reader tries to understand what is going on, and the final page reveal only throws the conspiracy into overdrive. Are we seeing the future? Is this the past? Or could this be an alternate dimension where things turned out quite different.

I don’t know what is going on, and I know even less know than I did five issues ago. And though I want to toss the issue aside and never return to the book, there is something oddly compelling in the twist that makes me want to come back for at least one more issue to see if any real clues are handed out.

Though the story has taken an odd turn, the art continues to be stellar, as Joe Eisma makes subtle changes to the school grounds that make it look old and run down, which leads me to believe this is the future – though I will be pleasantly surprised if it isn’t. I especially like how he keeps Jades face obscured throughout the issue as it drives the reader to really want to know who the mystery woman is.

This is a very strange issue. The sudden change in storyline and big reveal at the end will certainly confuse the hell out of readers, and considering we don’t know what is going on to begin with, this may be the straw that breaks the camel’s back for those who were debating on leaving the series. I like that Spencer is constantly shaking things up, but too much baiting without a payoff is going to turn readers off in the long run. Morning Glories is worth checking out if for nothing else than to see how to make the reader scratch their head. I liked the issue enough to go another issue, earning Morning Glories #6 3.5 out of 5 Stars.