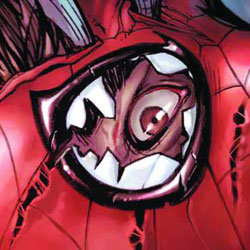 If life is so good for Peter Parker, why are villains still trying to kill him? And though J.J. Jameson is the target of the latest attack, Spider-Man is more than willing to risk life and limb for a friend. Previously in The Amazing Spider-Man: Peter Parker has finally settled into his perfect life; the best job at Horizon Labs, a girlfriend that loves him for him, and more money than he knows what to do with. Still there are those detractors that want to bring him down, but with Wilson Fisk out of the picture for a short while, who will step up to bring mayhem to Peter’s life?

John Jameson, son of J. Jonah Jameson, is set to ride to the stars in a new experimental shuttle designed by Horizon Labs. When it comes to John Jameson and space travel, long time readers of Spider-Man know the two often clash. This time around, no one is actually after Spider-Man, instead Alistair Smythe is back, and ready to strike the Jameson family – the entire Jameson family, and he’s starting with the space-fairing Colonel. The shuttle is rigged to explode! EXPLODE! Good thing comic readers are young, cause you know, an exploding shuttle incident might not sit well with some. Yeah… too soon, Slott. Too soon. And if you are wondering, I am being sarcastic. At least in this issue Slott didn’t try and make the issue hip and relevant by filling it with items that are going to be instantly dated three days after the issue hit stands.

But since this is a Spider-Man story, Peter Parker is at the launch site when a slew of Spider-Slayers attack. While Mayor Jameson’s forces attempt to fend off the attacking insect army, Spider-Man swings into action, climbs up the shuttle mid-launch ready to rescue the shuttle crew, only to come face to face with Mac Gargan – the Scorpion.

While I’ve become a huge fan of of Marvel’s Previously In pages that are designed to get the new reader up to speed, this time, the mock message board posting totally ruins any surprise as everything that is mentioned in the Super-Villain Message Board posting, plays out in the issue. It’s kind of like saying, “Hey kids! I’m giving this issue a 3 Star Review” way before the end of the article.

LAMENTING THE LOSS OF HUMBERTO RAMOS

Humberto Ramos has moved out of rotation this issue, and while Stefano Caselli serves up some really dynamic pages, I’m longing for Ramos’ return. Ramos has a style that lends itself to exaggerated expressions and overly proportioned body structures that looks good on the page. Caselli draws the human form that looks very natural, and while I can overlook the run away pencils that hint Peter Parker and Brezhnev may be related, when the artist attempts to add over-exaggerated expressions, the characters suddenly look like Silly Putty under the heat lamp.

By this time, my interest in a Marvel title usually wanes to the point where I’m keen on checking into the comings and goings of Bruce Wayne. The story this issue returns to some of the larger than life adventures that we’ve seen before, and while I can live with hundreds of Spider-Slayers attacking in mass, I’m really interested in seeing if Spider-Man will save the day (he will), thus pulling me in for another arc of web slinging action. The art by Caselli is good, and over all the issue is worth a look. It isn’t the shining ray of light the Big Time arc was, but it is still interesting, earning The Amazing Spider-Man #652 3 out of 5 Stars… but then again, you saw that coming.