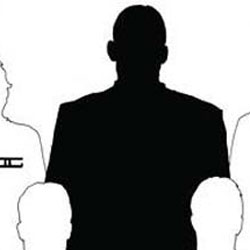 Ben McCool & Nikki Cook kick off a 6-issue tale that shrouds itself in melodrama and ugliness. Will our lead character, journalist Trent MacGowan lead us on an exploration that culminates in good comics? Let’s find out! 10 years ago a mysterious event left the townspeople of Lowesville without any memory of who or where they were, or what happened to cause the phenomenon. Journalist Trent MacGowan elects to take on an immersive assignment that takes him to this unusual little town in Middle America. His goal is to get to the bottom of the town’s strange history so that hey can uncover the truth about what really happened, if anything, 10 years ago in Lowesville.

Ben McCool gives us a glimpse into the background of our story by having MacGowan interviewed by a fellow TV newscaster. What ensues is a relatively pedantic information dump, bolstered by an undercurrent of sexual tension between the interviewer and interviewee. While this does inform the reader of MacGowan’s predatory sexual appetites, this information doesn’t seem to actively serve the story. To be fair, this is only the 1st of 6 issues, so it’s entirely possible that the overarching story of Memoir factors in the precept of sexual appetite as one of its themes. As it stands, my initial impression is that the creative team was attempting to foster titillation to set the tone for the ensuing melodrama.

This issue might work more effectively as a television or low-budget horror/suspense film. The over-the-top characters, overblown melodrama and the hint of horror present Memoir as a likely candidate for straight to DVD treatment, starring the likes of Lorenzo Lamas, Casper Van Dien or Anthony Sabato Jr.

Grayscale inkwash is delivered with a very ‘independent’ vibe and Memoir doesn’t carry physical characteristics that I would normally associate with an Image title. Without the Image indicia, I would ID this book as the product of Slave Labor Graphics, Top Shelf Publishing or possibly even AIT/Planet LAR.

So far, other than the protagonist, there is very little full-bodied character development. Instead, we’re met with mysterious shadow silhouettes of what appear to be children lurk at the edge of town, creating a sense of foreboding. Poses and facial expressions don’t appear organic. I appreciated the fact that everyone isn’t rendered to be classically attractive, there seems to be a concerted effort to depict the sundry of characters as ugly and grotesque. These ominous and 1-dimensional cardboard cutout townspeople display as much depth as the silhouetted children.

Bottom Line: Check It Out If You’re Into Made For TV Cable Movies

If you’re into spooky melodrama that would feel right at home as an 80-minute ‘SyFy Original,’ then I can safely say this is a book that warrants closer attention. However, if you’re looking for something more substantive with real bite, this isn’t necessarily something that I would add to my pull list. Memoir #1 earns 3 out of 5 stars.