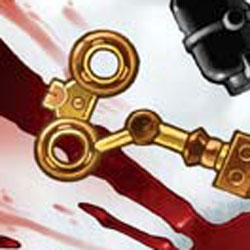 When evil lurks in the hallways and rooms of the Keyhouse, it will take the special talents of a special kid to discover what it will take to make the house clean for good. Previously in Locke & Key: The month of February was a rough one for the Locke kids as the forces of nature, and the forces unleashed by the magic keys created relationship issues across the board.  And though some issues have been worked out, some relationships are still damaged.

SQUADRON STRANGE IN THE HOUSE!

We haven’t seen much of Rufus Whedon since his first appearance a few arcs ago. The mentally challenged boy has a way of talking with his toys that make them seem almost alive – and they just might be. This issue puts Rufus front and center as we learn he’s able to see and talk with spirits, and when you are in the Keyhouse, the ghost with the most just happens to be Sam Lesser, the psycho that killed the Locke children’s father, and seriously maimed the Locke mother.

Lesser appears as a soldier, and walks Rufus through the entire house, trying to explain to him that in this war, Zack Wells is the enemy, and he must be stopped at all costs. At first Lesser tries to persuade Rufus to stick a knife in Zack’s gut, but Rufus can’t play with knives, which leads Lesser to explain that if Zack were forced back into the wellhouse, he’d be banished forever.

Last issue had the Locke kids finding and using a bunch of keys in rapid succession, and this issue explains point by point exactly what needs to happen to get rid of the evil forces. I know it seems like rather rushed story telling, but with only 15 issues left, Joe Hill needs a way to wrap things up in the next year and a half. While I would love to see this series go on forever, a road map to the endgame, is needed.

I was really kind of stunned with the way Hill portrayed Lesser. The serial killer is bad news all around, but this issue almost makes you want to sympathize with the psycho who was duped by Wells. I’m sure there is a hidden agenda in Lesser’s motives, and it will be interesting to see how that plays out going forward. I also like how Hill deals with Rufus. While he does have a mental handicap, Hill downplays the stereotype, which is good.

When Locke & Key wraps, I’m sure there will be a long line of those who want to hire Gabriel Rodriguez for their next work, and this issue shows why he is so awesome. We’ve seen him stretch his legs when he adapted Bill Waterson’s style into the story, and this time, Rodriguez shows what he could do if given a Sgt. Rock type tale. The issue flips back and forth between the world we know, and the world of Rufus, and each time the flip occurs, the art style changes to match. It’s very well done, and if you didn’t know it was Rodriguez throughout, you’d swear IDW hired someone else to do the work.

Long time readers of this site know Locke & Key can do no wrong in my book. While some may not like the big revelations, I think it works just fine in the overall story. Once again, Hill creates great character moments, and Rodriguez brings the words to life. Locke & Key: Keys to the Kingdom #4 is a great issue and earns 4.5 out of 5 Stars.