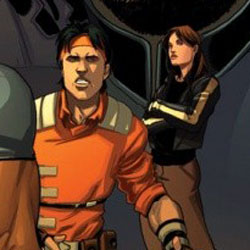 In anticipation for the biggest sci-fi release in decades, Marvel is proud to announce that Formic Wars: Burning Earth #1 (of 7) will be on sale February 15th, at select ComicsPRO retailers! The long awaited and highly demanded prequel to sci-fi pioneer, Orson Scott Card’s, legendary Ender’s Saga is finally here and Marvel wants fans nationwide to celebrate a day early! Co-written by Card and Aaron Johnston with art by Giancarlo Caracuzzo, Formic Wars: Burning Earth is the untold tale of mankind’s fateful first clash with the bug-like alien race known as the Formics…and the battle that ultimately sets Ender Wiggin on his quest to quell a galaxies-wide genocide. Mark your calendars and be the first person on your block to get the dynamic first issue, a Formic Wars: Burning Earth limited-edition cover print featuring the variant artwork of superstar Bryan Hitch – only at participating ComicsPRO retailers. Fans will also have a chance to shop through some great sales and stock up on great Ender’s Game collections! And that’s not all! Both Orson Scott Card and Aaron Johnston will be on hand at Chapel Hill Comics in Chapel Hill, North Carolina for a fan signing!

“We’re thrilled at the opportunity to work with ComicsPRO, the largest organization of professional comic shop retailers in the world, to expand outside the super-hero genre and bring in new readers who have been waiting for this epic story to be told,” explains Senior Vice President of Sales, David Gabriel. “With these outstanding retailers and the popularity of the Ender’s Game brand, it’s a surefire hit!”

Stay tuned to Marvel.com  for a complete list of retailers participating in this momentous occasion as the true origins behind the Hugo and Nebula-award winning saga that redefined science fiction are revealed! The story that Orson Scott Card fans have waited years to hear has finally arrived in Formic Wars: Burning Earth #1 (of 7), hitting select comics shops on February 15!

Plus, don’t miss the continued adventures of Ender in Orson Scott Card’s Speaker For The Dead #1 (of 5) — on sale January 26th —or in the graphic fiction adaptations of Ender’s Game and Ender’s Shadow, now available in hardcover collections at comic shops and book stores nationwide!

For more on the signing at Chapel Hill Comics, please visit www.chapelhillcomics.com