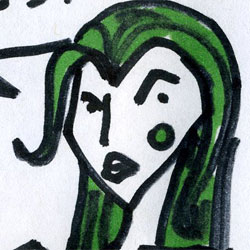 Major Spoilers Podcast #271: This Man, This Being in Trouble This week on the show: Aphrodite IX, Darkwing Duck, Dungeons and Dragons, and This man is being in trouble! the latest meme sweeping the Intardwebz.

NEWS
Wizards of the Coast says no new miniatures
Link

REVIEWS
Stephen
QUEEN SONJA #13
Written by LUKE LIEBERMAN
Art by MEL RUBI
Covers by FABIANO NEVES (50%) & CARLOS RAFAEL (50%)
The plot thickens as Sonja’s ambition and love of stealing brings trouble as she learns that one does not take lightly from Lord Fellon. Her innocence lost as young Sonja takes her first life, this is a pivotal turn in Sonja’s journey from wild child, to thief, to warrior.

Rodrigo
DARKWING DUCK #8 Written by Ian Brill Drawn by James Silvani COVER A: James Silvani COVER B: Diego Jourdan
It’s the grand finale and shocking end that will leave you wanting more! No, not of the series, but just this arc! With The Crisis on Infinite Darkwings reaching its zenith, an old evil (and no, we’re not talking Uncle Scrooge here people!) reemerges as the true source of St. Canard’s terrible water troubles! Cringe as both hero and villain find themselves treading turbulent terror! Gasp as the Darkwing Ducks rally to turn the tide toward triumph! Run to pick up the exciting conclusion of Crisis on Infinite Darkwings!

Matthew
HEROES FOR HIRE #2
Written by DAN ABNETT & ANDY LANNING
Penciled by BRAD WALKER
Cover by DOUG BRAITHWAITE
Variant Cover by HARVEY TOLIBAO
Starring Ghost Rider and Silver Sable! Hello, hero are you for hire? Can you stop the distribution of lethal combat weapons on the streets of America’s cities? What happens if the weapons are cursed? Can you fight a demonic force? Who are you going to call for help? Howzabout Silver Sable, Paladin, Misty Knight, Satanna and….Ghost Rider? The non-stop action and the mysterious shadowplay continues in this smash new street level book from the creative team that changed the face of Marvel Cosmic! THIS MAN IS BEING IN TROUBLE!!!

MAJOR SPOILERS POLL OF THE WEEK
We’re all trying to be better stewards of the planet at Major Spoilers, but sometimes trying to be green leads to a bit of conflict – especially when Marvel and DC are involved.  This week it is the battle of the creatures from the bog; Swamp Thing and Man-Thing.

MAJOR SPOILERS DISCUSSION: Aphrodite IX
Aphrodite IX Trade Paperback collects issues #1-4 of the series of the same name as well as the hard to find issue #0 plus incredible bonus art by Marc Silvestri (Civil War: The Initiative, Hunter-Killer), Joe Benitez (Supergirl), and Michael Turner (Superman/Batman, Ultimate Wolverine). Aphrodite IX is the perfect weapon, only she doesn’t know it. She’s programmed to kill and then erases all memory of her mission and her former life, like a reset button was hit in her mind. Now the ideal assassin wants to know who programmed her and she won’t stop until she finds out!