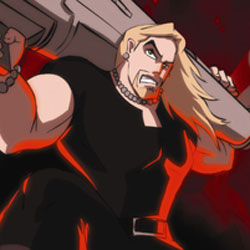 Hound Comics CEO William ‘Brimstone’ Kucmierowski is looking to make Brimstone and The Borderhounds: The Animated Series into a family affair.  Rather than auditioning a slew of actors and actresses, Hound Comics and Floating Pear Productions have chosen to cherry pick what they feel is the perfect cast for the eclectic grouping of Borderhound characters.  The well-known names create an ensemble that represents the wide spectrum of entertainment including pro wrestlers, models, reality stars and other personalities.  “When working in entertainment, you can go for months at a clip living in your own little world.  Utilizing the talents of these fantastic entertainers is a no brainer and at the same time gives me an excuse to hang out with my friends” says Brimstone.

Hot off the heels of their worldwide release of the comic book on newsstands in Barnes & Noble, Book World, and Amazon; the Hound Comics crew has been anticipating the World Wide Premiere of the animated series that has been in production with partners Floating Pear Productions, LLC.  The exclusive ‘first look sneak peek’ will be offered initially at Wizard World Entertainment’s Miami event which is slated to take place at the Miami Airport Convention Center located at 711 N.W. 72nd Avenue, Miami, FL 33126 on February 26th and 27th.  “Wizard World is proud to announce the launch of ‘Brimstone and The Borderhounds: The Animated Series’ at Miami Comic Con,” said Gareb Shamus, Wizard World CEO.  “It fits perfectly with our tradition of world premieres and sneak peeks of exciting new shows, and it’s particularly gratifying given our long relationship with Brimstone.”  To which Brimstone adds, “Wizard World Comic Cons are a staple in the Hound Comics’ marketing arsenal.  I’m honored to be able to work with Wizard concerning this major milestone in the Borderhounds franchise!”

The confirmed celebrity voices that will be gracing the series will include Brimstone as himself, Jose Hernandez, Jr. (HBO’s Oz) as Dawg, former WWE Smackdown Superstar Kaval as Orgrathan, Brutus ‘The Barber’ Beefcake (WWE Legend) as Txigon with Greg ‘The Hammer’ Valentine (WWE Legend) as Txigon’s right hand man.  Other celebrity guest stars that are linked to the production voice-wise are Claire Unabia and Kim Leemans (America’s Next Top Model), Darra ‘Like Dat’ Boyd (VH1’s  Flavor of Love & Charm School), and Robb Demarest (SyFy’s Ghost Hunters International) along with plenty of other special guests.  Theme music for the series boasts a fast paced, in your face, classic Saturday morning cartoon sound with an edge; compliments of Ron ‘Bumblefoot’ Thal, lead guitarist for Guns N’ Roses.

It’s amazing that the cast is just as ecstatic about getting the ball rolling.  “I am very intrigued by the series.  I look forward to giving Orgrathan a voice!” says, Kaval.  Beefcake states, “I’m very excited to be involved with this very cutting edge animation project!  Brimstone and The Borderhounds is sure to be a huge success!”  Demarest makes his comic debut with the Borderhounds in issue four with his guest appearance and will continue the relationship with Hound Comics by lending the voice to himself in the animated series.  “We’re looking to bring back the days where celebrity cameos were fun, made sense and worked into the actual story, like Scooby Doo… just a lot less hokey!” says Brimstone.  “Being a life-long comic book reader and fan, when this opportunity came along, I was more than excited to be a part of it.  We didn’t want this to be a forced ‘guest appearance’, and we are confident that fans will be pleased!” says Demarest.  As for the other main characters in the cast; most voices will be reprised by their real life counterparts such as Mr. Hostile (Chris Hostile), Chavez Raoul (Jake Dixon) and Luscious (Eddie Castillo).

The new “Borderhounds” series will not only appeal to a mature audience who can appreciate the dark undertone driven story-arc and tongue-in-cheek humor; but to the young viewers as well.  “We are looking to appeal to a broad age range and demographic.” says Sajad Shah, co-founder of Hound Comics and penciler for Brimstone and The Borderhounds.   “Dee [Boyd] and Damon [Wong] at Floating Pear have gone above and beyond to stay true to the title and its characters! Once the killer cast of entertainers lend their personalities to the mix… this series is bound to make some noise!”