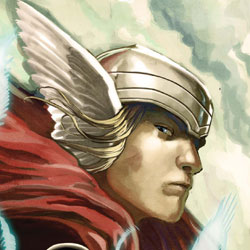 Fear Itself strikes Journey into Mystery

Loki vs. Fear Itself! This April, the blockbuster Thor creative team of Kieron Gillen and Doug Braithwaite return to Asgard with Journey Into Mystery #622! Prepare for a blood and thunder fueled epic that pits the malevolent mind of Thor’s brother against an evil more twisted and far blacker than his own. Can the eternal trickster and the Mighty Avenger work together to fight back this fearsome foe? And, in the face of Fear Itself, can he be trusted with the lives of those he has betrayed so many times before? Unlock the armory and man the parapets because, this April, the World Tree’s final fate lies in the hands of Marvel’s master manipulator as the Thor ongoing series becomes Journey Into Mystery!

“My year on Thor was just glorious hyperspeed chaos, from start to end,” said Gillen. “[When] I was asked to do Journey Into Mystery…my first thought is exactly what we’re doing with it. Put it like this: I couldn’t be more excited if I had an invite to go drinking in the halls of Valhalla.”

Plus, get caught all caught up on Thor since he made his return to the Marvel Universe in J. Michael Straczynski’s epic run and discover the hidden truths of Loki’s reincarnation, only in the oversized Journey Into Mystery #622, on sale this April!