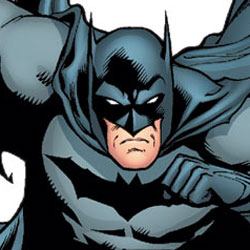 What do you do when your new villain has a hole in her head? If you are Batman and Robin, you let her try and drill a hole in their heads. Previously in Batman and Robin: A new villainess is on the scene, and she literally has a hole in her head. She’s bent on taking down someone for something, all because Bruce Wayne dissed her because he didn’t give her some… thing. If there is a crime in Gotham City, you can bet Batman and Robin are on the case!

Right off the top, I will say that Una Nemo is one of the lamest characters ever dreamt up. She ranks right up there with Arm-Fall-Off Boy. I’m half waiting for some league of something or other to have a fit over Uno’s portrayal in this arc, but I know that won’t happen… Instead Uno’s eventual escape will lead to her return at some point in the near future. The whole “Bruce Wayne never gave me enough attention!” schtick is not worth paying attention to, nor is the gimmick behind her survival after being shot point blank in the head that was revealed in the first issue.

The thing that does make this issue bearable, and more than likely the whole point of the issue, is the psychological discussion that arises when Batman and Robin (played this issue by Dick and Damian) have the opportunity to either sacrifice one to save the other, both go down fighting, or work something out in order to free themselves from Uno’s exceptionally well thought out trap. (Yes, that last bit is sarcasm). The implication is they’ve been so well trained by Batman, and have been so mentally manipulated all their lives that they are willing to be expendable units for the cause.

I like that portion of the story, but the rest is really not interesting. Cornell is a fine writer, and he does give the reader things to read, but for the most part, this issue is mediocre.

I’ve said before that Scott McDaniel works in small doses as his style takes a lot of getting used to, and I think I’ve reached that point where I need a break from his style. Not that I hate it, in fact I’ve praised it before, but between all the Bat-titles currently out there, I’ve looked at his stuff for around nine months now. His style is instantly recognizable, and while it does stand out, it also tends to suffer too much from generic pose syndrome by the time any arc reaches the end.

From the moment she first appeared, I simply have no interest in Uno Nemo or what her petty problems are that drove her to become a psychopath. I HOPE we don’t see her return, but I half expect her to, if for no other reason than to spite me for this review. Cornell can write, and McDaniel can draw, but for this arc, the combo falls completely flat. I say skip Batman and Robin #19, and see if it gets better next time.