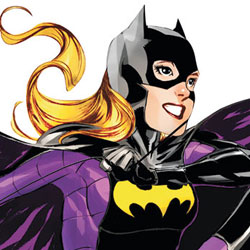 The Dysfunctional Duo return as Stephanie Brown and Damian Wayne team-up for another issue of hijinks and heroism. Will the heroes have a heartfelt hearing out, or will they simply punch their way through the issue slinging barbs every chance they get? Previously in Batgirl: Stephanie Brown spends her days as a normal college student at Gotham University, but at night she swings through the city as the dark knight of vengeance… with a nice figure.

DAMIAN AND STEPHANIE SITTING IN A TREE

The last time Damian Wayne and Stephanie Brown teamed up, they almost killed one another because of personality conflicts. This issue finds Damian and Stephanie investigating the same case – Damian by “accident” and Stephanie by assignment from “Batman-Batman”. Seems someone is kidnapping children from the middle-class, and it will take the combined effort of both heroes to stop the ne’er-do-wells.

As a done-in-one issue, the writing by Miller is great. Every time Stephanie and Damian appear together, they’re at each other’s throats, exchanging subtle (and sometimes not so subtle) insults at one another. And yet, as much as the two dislike one another, the two are actually able to connect in a way that Dick, Tim, Bruce, or Alfred have. Perhaps its the fact that Damian is a boy hitting puberty and Stephanie doesn’t look to shabby in her tight leather costume, or perhaps it is Stephanie needing to fill the mother role she missed after her pregnancy. Whatever the reasoning, this is by far one of the best character development issues I’ve read in the last six months.

Do I want to see a permanent pair of the two? Not in this title, because Stephanie still has a ways to go to work out her issues. Would it work if every six months we were offered another done-in-one Batgirl and Robin team-up. You betcha! Do we ever need to see the two hooking up? Oh Hell No!

While Miller’s writing gives voice to the characters, it’s the art by Pere Perez that brings them to life. Perez handles body types wonderfully, giving each person on the page a unique build that has weight and purpose, as opposed to HERO POSE #215 or BY-STANDER POSE #254. Because the end sequence involves the kidnapping of a bus full of school children, the the use of horizontal panels brings a Dirty Harry movie vibe to the issue.

As dull as the Batman titles have been lately, it’s nice to see a done-in-one issue that has a lot of spark in terms of action, character development, and art. Batgirl #17 is worth your time, even if seeing Damian wearing children’s clothing and feeling completely out of place. Buy it now, and send a message to DC Comics that this is how to do a team-up that is fun and hits on all the points. Batgirl #17 definitely earns 4.5 Stars.