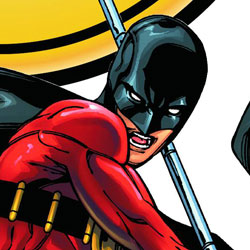 There will come a time when we will be able to plug our brains directly into an interconnected network of computers, and live forever as a series of ones and zeroes. Until that day, we’ll just have to take a precautionary look at things to come as Red Robin and friends invade the Unternet. Previously in Red Robin: While tracking down his latest lead in Russia, Red Robin and friends run afoul of someone very well connected. What was a casual trip, turns into a power struggle as Red Robin and Red Star end up facing off. It’s a good thing one of those technology glitches shows up just in time to change things up.

WELCOME TO THE UNTERNET! ENJOY YOUR STAY!

When Red Robin comes to, he discovers everything isn’t how he remembered it. Cheesy versions of his deadliest foes abound, Anti-Life Lives signs are everywhere, and it generally looks like chaos reigns supreme. It isn’t until 1960s versions of Batman and Robin show up to free Tim, and give him the chance to move through this strange world, that he realizes he’s really in the Unternet.

For those who didn’t start reading DC until after Final Crisis, the Unternet is a sub-level of the Internet that The Calculator uses to network all the villains of the world together. When Darkseid got his hands on it, the Anti-Life equation carved out a spot to call home, and it’s been a virtual world of desires ever since. Russian entrepreneur, Viktor Mikalek, has set himself up as one of the prime rulers of the Unternet, and each time a villain logs in, he collects a fee, and since everyone is connected in a shared mind environment, he has shaped a world where the heroes lost and the bad guys get to do whatever they want.

While the story swerve throws off the reader, it does kind of come together at the end. With Tim, Tamara Fox, Anarchy, and Promise all trapped inside, they work together to lock Mikalek out of the Unternet and bring the virtual versions of the DC heroes back to life. The only hitch in their plan is that someone must always stay connected to the Unternet if order is to be maintained. Lonnie (a.k.a. Anarchy) volunteers, which is someone convenient from the writing standpoint as it allows Red Robin writers to stuff Lonnie away until he is needed again, or as way to turn him back into a villain.

The side-quest is a very quick one, and it gives Nicieza a chance to run free without worrying about adhering to strict continuity. It also gives readers a chance to see what is going on in the Unternet – something that appears every six months of so in the pages of Dc Comics. While the structure of the story is fine, it really didn’t do it for me. The conflict between Red Star and Red Robin is wrapped up without the two actually interacting with one another. The relationship between Tim and Tamara spins, and there is no real development of Promise. The only real forward movement in the story comes at the end when Catman is hired to kill TIm and Tamara, which should be an interesting story in itself, but does bring up some inter-title conflict between Secret Six, Birds of Prey, and Red Robin.

In a world where anything goes, it would be very easy for Marcus To and the rest of the art team to stretch and distort reality to drastic extremes. While things do seem rather crazy (floating people, giant peacocks, and so on), To keeps things pretty normal. Overall design is nice, and readers do get a chance to see characters in different costumes, and there are several heroes from different titles and universes that make an appearance.

Fans of Red Robin (YUMMM… there I said, are you happy now?) will have already picked up this issue, and for the rest, Red Robin #19 might be worth checking out. The structure of the story is fine, and the art really works, but the real events of the issue could have been told in about six pages. This isn’t a terrible issue, but it certainly isn’t one of the better stories we’ve seen so far. It’s an average read, and earns an average rating of 2.5 out of 5 Stars.